Delhi roads to be redesigned along the lines of European cities-C.M.Delhi 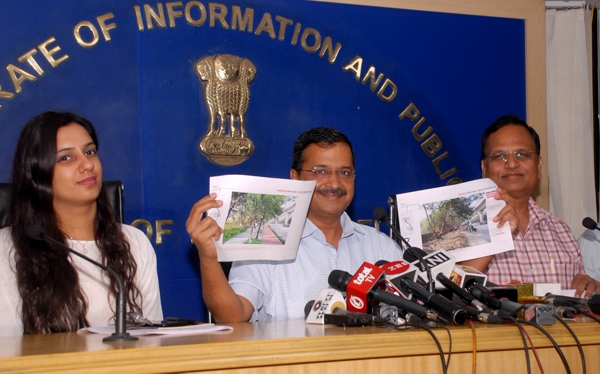 Addressing a press conference in the Delhi Secretariat on Tuesday, Delhi Chief Minister Shri Arvind Kejriwal announced redesigning of 9 stretches of roads in Delhi to combat the problem of traffic congestion and bottleneck roads in the city.

The Chief Minister said, “All the roads of Delhi will be entirely redesigned as per international standards. We have been trying to do this for a few years now, and our hard work has paid off. Nine road stretches of 45 km will be redesigned on a pilot basis. Work orders for one road have been given today, and work orders for two roads will be given tomorrow. The work orders for the remaining roads will be given in the month of November. We hope to improve the condition of the roads and tackle the problem of traffic congestion by redesigning the roads within a year. The cost of redesigning these nine stretches will be Rs 400 crores.”

The Chief Minister also said that if the pilot project of redesigning these nine stretches is successful, then all the other roads under the jurisdiction of PWD will be redesigned along the same lines. Pictures of the planned road structures were also shown in the press conference to the media.

Redesigning to solve various issues through proper planning and mapping

Delhi CM Shri Arvind Kejriwal said that people face issues because there are bottleneck roads, which create the problem of traffic congestion at various locations in the city. “There is heavy traffic congestion on the bottleneck roads of the city. The wide roads in Delhi significantly turn into a narrow lane after a few miles, and then back into a wide road after a few miles, which create a bottleneck situation and heavy traffic at some particular locations. Our priority will be removing those bottlenecks first, for a smooth flow of traffic and an organized lane system. Our second work would be to increase the efficiency of the existing space of the roads in the city so that spaces are best utilized as per their abilities. There is no proper planning or mapping involved in the construction of roads as of now. There will be measured and planned spaces for vehicles, non-motorized vehicles, footpaths, and side-lanes. The footpaths will be widely mapped to an average of 10 feet for the convenience of the peddlers. These footpaths will be redesigned and reconstructed as per a standard height for the convenience of physically handicapped,” said the Chief Minister.

Rainwater harvesting systems to be built inside the drains, roads to have separate spaces for tree plantation

No surface will be left unpaved or unscaped for dust control: CM Shri Kejriwal

“Not even an inch of surface of any road or roadside will be left uncovered, in order to ensure that there is no dust on the roads. Adequate grasses and shrubs will be planted on all surfaces to ensure dust control,” said CM Shri Kejriwal.

Nine road stretches to be redesigned