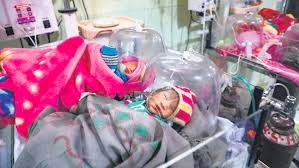 New Delhi: In a landmark development, the Hon’ble Supreme Court of India has issued a notice asking the Central Government, and states of Delhi, Haryana and Rajasthan Government to respond to a petition jointly filed by Heart Care Foundation of India’s President Dr KK Aggarwal and social worker Bijon Mishra seeking an investigation into the death of over 100 infants at JK Lon Maternal Hospital in Kota. A bench comprising of Chief Justice S A Bobde and Justices B R Gavai and Surya Kant issued the notice.

Dr KK Aggarwal through his NGO has been fighting for the healthcare rights of those belonging to financially weaker sections of the society since over two decades. This PIL was filed after nearly 100 children lost their lives allegedly due to severe crunch of staff, shortage of medical equipment and doctors not responding in a timely manner.The report released post the incident indicated that infants lost their lives due to hypothermia, a medical emergency that occurs when the body temperature falls drastically. The report further found that a majority of the nebulisers and infusion pumps at the hospital were dysfunctional.

Speaking on the same, Dr KK Aggarwal – Padma Shri Awardee, President Heart Care Foundation of India (HCFI) & Editor-in-Chief IJCP Group and MedTalks.in said, “We are extremely happy to learn about Supreme Court’s notice and feel that it is very important that the deaths of these infants are not forgotten. We are facing a healthcare crisis in our country due to our inability to save the lives of our country’s future generation. It is shocking that in 2018, an estimated 882,000 children under five died in India, the highest in the world. Many of the deaths occur before children turn one. Some reasons for this include improper medical care, lack of infrastructure, shortage of doctors and an overall lack of awareness. It is imperative that concentrated efforts are made by both the government and private players to avert such deaths in the future.

Commenting on the Judgment, Bijon Mishra, Public Health Worker said, “This is definitely a win for us, but a lot still needs to be done. It is crucial that the shortage of medical professionals and basic medical equipment in smaller cities is dealt with on priority to ensure no more lives are lost due to preventable issues. We hope that the government will take necessary action”. Earlier in the month, the Union health minister Harsh Vardhan had asked the Rajasthan Chief Minister, Ashok Gehlot to “assess the situation and take proactive steps to avoid these preventable child deaths due to lack of health system capacity.

A few steps that can help prevent such instances include: