We are committed to “Honour” of all Indians-M.A.Naqvi 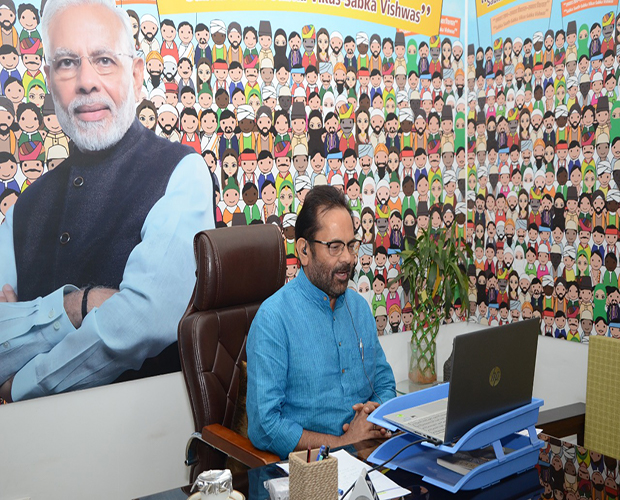 New Delhi: Senior BJP leader and Union Minister Shri Mukhtar Abbas Naqvi today said here that while we are committed to “Honour” of all Indians, on the other hand, some people are conspiring to create “Horror” in India.

While addressing Uttar Pradesh BJP Minority Morcha workers through a virtual conference, Shri Naqvi said that “Inclusive Empowerment” has been “Rashtraniti” and not “Rajniti” for the Government led by Prime Minister Shri Narendra Modi.

Shri Naqvi said that the Modi Government has been working with commitment to happiness in eyes and prosperity in the life of every needy. This has ensured that each and every section of the society including Minorities have become an equal partner of prosperity, dignity and empowerment. All sections of the society are moving forward on the path of inclusive empowerment without any discrimination.

Shri Naqvi said that some people and organisations in the country itself are engaged in obstructing this journey of inclusive growth, empowerment, dignity and harmony due to their narrow and prejudiced political self-interests. They are involved in a criminal conspiracy to disgrace India and Indians. We should not only remain cautious of these nefarious elements but also expose and isolate them. They are unable to digest the positive atmosphere and constructive mood of the country, the “Bogus Bashing Brigade” is trying to raise the bogey of “Islamophobia”, intolerance, the safety of Minorities etc just to defame India and disturb the fabric of communal harmony and unity of the country.

The BJP is not only the largest political party of the world, but it is also an “Inclusive Family” which is working for the prosperity of all with a commitment to nationalism by removing the barriers of region and religion. While on one hand some political parties are confined to a particular family frame, on the other hand, the BJP is “all-embracing family” which is moving forward with the ethos of “Sabka Sath, Sabka Vikas, Sabka Vishwas” and commitment to “Ek Bharat Shreshtha Bharat”. During the last 6 years, the Modi Government has worked with commitment to “Development without Discrimination” and “Development with Dignity” which has ensured that Minorities have also become an equal partner of mainstream development. All the poor and weaker sections including Minorities have been equally benefitted through Modi Government’s schemes such as PM Awas Yojana, Ujjwala Yojna, Ayushman Bharat, Kisan Samman Nidhi, Jan Dhan Yojana, Mudra Yojana, electrification drive, PM Sadak Yojana, One Nation-One Ration Card etc. Besides, the Minorities have significantly benefitted through various welfare measures taken by the Union Minority Affairs Ministry.