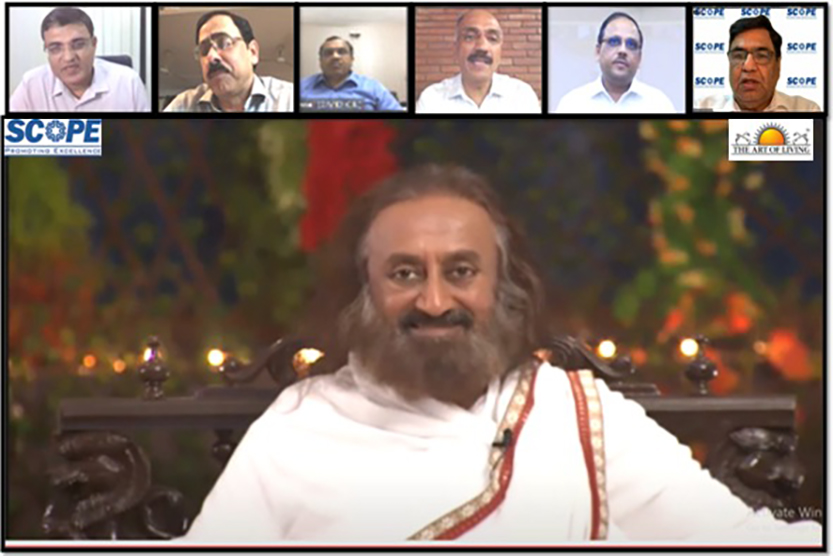 New Delhi: Standing Conference of Public Enterprises (SCOPE) in a bid to infuse positivity and mental well-being among Public Sector Enterprises (PSEs) during this pandemic situation, hosted an interactive Webinar with one of the world’s most revered spiritual leaders and founder of The Art of Living, Gurudev Sri Sri Ravi Shankar and Chief Executives of leading PSEs including Shri Anil Kumar Chaudhary, Chairman, SAIL; Shri Pramod Agrawal, CMD, CIL; Shri Rakesh Kumar, CMD, NLCIL and Chairman, SCOPE; Dr. Nalin Shinghal, CMD, BHEL, and Shri Manoj Jain, CMD, GAIL. The webinar was hosted by Shri Atul Sobti DG, SCOPE. The Session titled ‘Leading through Unchartered Waters’ aimed at bestowing spiritual guidance and achieving mental wellness in these times of isolation. The live streaming of the interaction was viewed by many through social media platforms of SCOPE and Art of Living. The interactive session was followed by a GlobalMeditation session with devotees from 142 countries.

Reaching out to his viewers in his reflective style, Sri Sri Ravi Shankar infused anecdotes to reiterate that the biggest challenge was to remain positive in these times of crisis. He emphasized on meditation for harmonizing body, mind, and emotions and the importance of cooperation among all. He advised PSEs to skill the youth in the country, create employment opportunities, and update themselves to be globally competitive. He also encouraged everyone to adopt a ‘Sakaratmak’ mode and rise to the occasion rather than succumbing to it.

Shri Atul Sobti DG, SCOPE while thanking Guruji for the blessed interaction highlighted the role of PSEs in the economy and their efforts in times of crisis and stated that this was the most cherished moment in SCOPE’s digital journey The Chief Executives on the panel asked pragmatic questions that were candidly responded to by Guruji who advised them to tread ahead with self-belief and perseverance as, like any crisis faced by humans, this too shall pass.