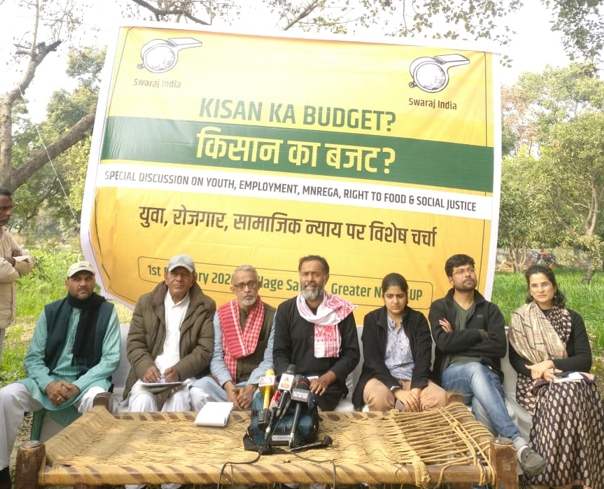 Delhi, The Union Budget presented by the Finance Minister Shrimati Nirmala Sitharaman today represents the biggest onslaught on Indian agriculture and farmers witnessed in recent times and is nothing short of declaring war on them, said Yogendra Yadav, Founder of Jai Kisan Andolan & President of Swaraj India. He said: Her speech was full of platitudes for the farmers but she concealed the figures of actual allocation in her budget speech. The actual figures available from the budget documents indicate that the Government has launched a multi-pronged attack on Indian farmers and agriculture sector.

First of all, the funds given to Food Corporation of India for procurement and PDS operations have been slashed from Rs. 1,51,000 lakh crore to Rs. 75,000 crores. This unprecedented cut is bound to hurt procurement operations and would leave the farmers at the mercy of private traders. This suspicion is strengthened when we see that the the allocation for PM AASHA, MIS and PSS Schemes have also been reduced from Rs.1,500 crore to Rs. 500 crores and Rs. 3,000 crores to Rs. 2,000 crores respectively.  The second onslaught comes via a drastic reduction in fertilizer subsidy from Rs. 79,996 crores to Rs. 70,139 crores. This comes in the wake of increasing price for fertilizers in the domestic and international market. The third onslaught comes through a reduction in funds allocated for MNREGA, the primary source of sustenance for agricultural labour. Against the estimated expenditure of Rs. 71,000 crore for MNREGA in this financial year, the finance minister has allotted only Rs. 61,500 crore for the next financial year. It should be kept in mind that experts have pointed out that the actual expenditure this year is likely to cross Rs. 75,000 crores and therefore the government would begin with a deficit of at least Rs.13,500 crores. This will lead to suppression of demand for work and throttle an important livelihood source of rural people.
Avik Saha, National Convenor of Jai Kisan Andolan said: All economists agree that the smartest thing for the government to do would be to put money in the hands of rural people as that has almost three times multiplier effect on the economy – yet the government has chosen to take away money from rural India. This is sabotage of the chances of rural India to escape the ongoing crippling income and employment crisis.GOVERNMENT DECLARES WAR ON FARMERS THROUGH UNION BUDGET 2020: YOGENDRA YADAV