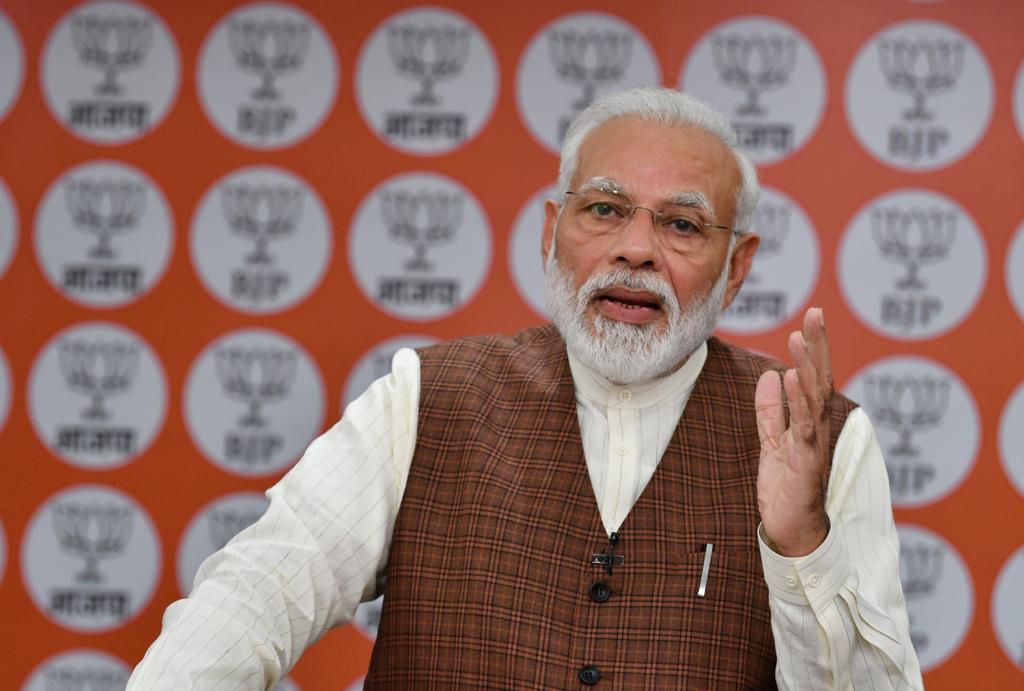 (New Delhi, Z.A.Ansari, Admin Editor),Prime Minister Shri Narendra Modi interacted with Karyakartas of Bhartiya Janta Party through Video Conference under the Deepotsav Karyakarta Samvaad. The Karyakartas were assembled at five different locations in Varanasi viz. Varanasi North, Varanasi South, Varanasi Cantt, Rohania and Sewapuri. Prime Minister welcomed the Karyakartas and wished everyone a very Happy and prosperous Diwali, Bhai Dooj and Chhath. He asked them to recall, in the times of festivities, the contribution of those who work for us in the background to ensure our freedom, safety and well-being – our armed forces, police personnel, paramilitary staff.

Stressing on the importance of celebrating Gandhi @150, Prime Minister noted the positive impact of Gandhi Padyatras in spreading the message of Bapu. He urged everyone to buy locally, starting from their village to district to state. This will boost the local economy, generate jobs and empower the local community. He also asked people to work towards empowerment of women especially girl child and requested them to highlight the achievements of women under ‘Bharat ki Laxmi’ initiative. Prime Minister exhorted the Karyakartas to spread information about social security schemes of government like Ayushman Bharat so that benefit could reach the last mile. He highlighted the jump in India’s ranking in the World Bank’s Ease of Doing Business Index. He also outlined the efforts of the government to curb the menace of single-use plastics, improve infrastructure, build houses for the poor and other such schemes to ensure Ease of Living.

Taking stock of the developmental activities in Kashi, Prime Minister highlighted increase in tourism and consolidation of medical infrastructure through setting up of Cancer Hospitals. He thanked the families who have given up their property to facilitate the development of Kashi Vishwanath Dham Corridor, which is facilitating a facelift of Kashi. Stating that he derives his energy from the party Karyakartas, Prime Minister asked them to regularly meet the Senior Karykartas in order to learn from their indomitable spirit in the face of insurmountable odds. He also paid tribute to Late Shri Kameshwar Narayn Singh, the veteran BJP Karyakarta who passed away recently.