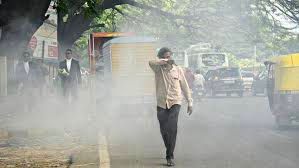 Atmospheric scientists from Manchester and India have partnered to tackle chronic air pollution which is impacting the health of more than 20 million people in Greater Delhi.Delhi, one of India’s most densely populated metropolitan areas, has some of the worst air pollution of any city in the world. Air quality experts from The University of Manchester, UK, have now partnered with colleagues from the Indian Ministry of Earth Sciences, Indian Institute of Tropical Meteorology and Indian Institute of Technology Madras, to help drive science-based policy changes.

The new and ongoing study will further identify the causes behind the pollution crisis and inform ongoing and future policy before analysing the effectiveness of the interventions.The Chief Minister in the Indian capital, Arvind Kejriwal, has recently described the pollution as having “reached unbearable levels”, with low visibility due to smog and an increase in respiratory illnesses sparking calls for a response.Schools across the city have recently been ordered to close, construction projects halted and residents advised to avoid outdoor activities as the air quality has reached hazardous levels.

Professor Hugh Coe, who is a leading member of the team from The University of Manchester, said: “Air pollution in Delhi is linked to a range of factors, including heavy traffic, burnt waste and the dusty air in pre-monsoon season. Crop burning is a very important source at the end of the growing season. Pollution impacts are similarly wide-ranging: lung damage, heart disease, cognitive impairment and other conditions have been associated with poor quality of air.”One of the key measures for determining the true extent of Delhi’s current pollution problem will be to measure particulate matter concentrations across the city. This detail will build a picture of the sum total of all hazardous solid and liquid particles suspended in the air.“The research into these is in its early stages but is already providing insights. The work we have done shows that although there are some variations in particulate matter concentrations across the city, the contributions from different sources are broadly similar,” says Professor Coe.

“This will facilitate better policy implementation since the routes to reduction via policy interventions need to be broadly similar across the city.”Scientists from the Indian Institute of Tropical Meteorology have already developed the SAFAR (System of Air Quality and Weather Forecasting and Research) for advanced air quality forecasting for Delhi.

A representative from the Indian Institute of Tropical Meteorology, said: “The collaboration with UK scientists will make a valuable addition to the SAFAR model by providing expertise in developing new parameterization for secondary aerosol formation. The SAFAR system has recently developed ultrahigh resolution (400 m2) emission inventory for Delhi which accounted 26 sources and concluded that the transport sector is the most dominant sector contributing 41% in total particulate matter concentration.“The industrial sector has been found to be the second most dominating factor contributing 22.3%. The contributions from power sector, biofuel sector, resuspended dust and others are found to be 3%, 5.7%, 18% and 11.7% respectively.”

The UK has extensive experience of conducting atmospheric chemistry measurements and carrying out computer modelling of air pollution that is world-leading. India has a rapidly growing research base in this field and a huge amount of local knowledge and understanding of the air pollution problems in Indian cities. “Harnessing these two strengths in a joint programme that has collaborative and multi-disciplinary research at its heart is vital in making rapid progress towards improving air quality in cities across the globe,” according to Professor Coe.