Should it be mandatory for doctors to get vaccinated before treating patients? 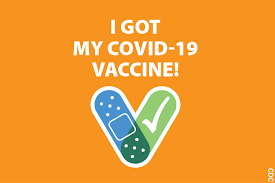 Vaccination protects recipients from serious illness and complications of vaccine-preventable diseases which in case of COVID includes pneumonia, heart diseases, kidney disease and even death. Vaccines are generally very effective and also safe. The few side-effects they do produce are generally minor ones. Currently available COVID vaccines are no different; 60-95% effective with few side-effects. The few side-effects that are present may range from muscle aches or a raised temperature. However, the only real concern is regarding an allergic reaction; anaphylaxis. While those individuals who have had a severe allergic reaction (anaphylaxis) to injectables or other vaccines should discuss the vaccination with their doctor, minor allergies do not matter. In any case, individuals receiving vaccination are monitored for a period of 30 minutes or so (time period when anaphylaxis generally happens). However, despite this rather minor side-effect profile of vaccination, many individuals, even doctors are afraid of getting the shot of the vaccine. While at an individual level it may be a matter of individual choice at the societal level these decisions impact the entire community. Going even further, those individuals who in their course of work interact with a lot of public front-line workers) have a responsibility towards those with whom they are interacting daily. Should the choice to get vaccinated or not belong to them?

While vaccination protects an individual (and offers herd immunity), it also makes the individual receiving vaccination less able to transmit corona virus infection. Front-line workers are not only health-care workers but all those workers who interact with a lot of public during the course of their daily work. Some examples of those frontline workers are those who staff our grocery stores (workers in malls and stores) and restaurants, provide waste management services, operate public transportation, or provide critical police/defense or fire services.

Pilots and individuals at risk

Whole plane – load of passengers and crew are dependent on quick and good decision making by the commanding pilot for their safety. Thus pilot should possess a good physical and mental health not only for him / herself but for the safety of entire airplane fliers. Thus to ensure this safety, every commercial pilot’s license holder is obliged to have a Class-1 medical check every year. A commander holding an airline transport pilot’s Licence (ATPL) and all pilots aged over 40 are obliged to have medical tests twice a year. As a matter of fact, pilot’s detected to have medical conditions like coronary heart disease (angina pectoris/ heart attack) treated or untreated, cardiac valve replacement or diabetes mellitus requiring hypoglycemic medication, heart replacement, permanent pacemaker, and thus at risk of suffering sudden cardiac death are generally debarred from flying airplanes. Furthermore those suffering from physical disorders like epilepsy and those suffering from altered consciousness (substance abuse / dependence or otherwise), serious personality disorders / psychosis like  bipolar disorder or even transient loss of control of nervous system function(s) without satisfactory explanation of cause are generally debarred from flying a plane.

The singular case of “Typhoid Mary”

Mary Mallon was born in 1869 in Cookstown, Ireland and immigrated to the US in 1884. She had worked in a variety of domestic positions for wealthy families prior to settling into her career as a cook.  Unknown to her or despite this knowledge, she was a healthy carrier of Salmonella typhi. She was engaged in 1906 as a cook by Charles Henry Warren, a wealthy New York banker, who lived in Oyster Bay, on north coast of Long Island. From 27 August to 3 September, 6 of the 11 people present in the house were suffering from typhoid fever.  The sanitary engineer, George Sober, believed initially that freshwater clams could be involved in these infections and thus Mary was let off and continued to host the bacteria, contaminating everything around her, a real threat for the surrounding environment.  Later Sober solved the mystery and became the first one to describe a “healthy carrier” of Salmonella typhi in the United States. From March 1907, Sober started stalking Mary Mallon in Manhattan and he revealed that she was transmitting disease and death by her activity. His attempts to obtain samples of Mary’s feces, urine and blood, earned him nothing but being chased by her. Sober reconstituted the puzzle by discovering that previously the cook had served in 8 families; 7 of them had experienced cases of typhoid. Twenty-two people presented signs of infection and some died. Overall,   Mary was presumed to have infected 51 people, and three of those illnesses resulted in death, but the real deaths could have been higher and this earned her the nickname of “Typhoid Mary” and it had become synonymous with the spread of disease, as many were infected due to her denial of being ill. Even though she felt fine, her feces was full of highly contagious typhoid bacteria!  She then used her hands to make food, spreading the bacteria as an unwanted ingredient into the food and mouths of the families for whom she cooked. Thus in Mary’s case, her being a ‘front-line worker’ , a cook, was especially problematic because she could spread the disease to so many people. In her life, she never admitted to being a carrier of typhoid, and perhaps without the education to understand it, actually never believed it. She was forced into quarantine on two separate occasions on North Brother Island for a total of 26 years and died alone without friends, having evidently found consolation in her religion to which she gave her faith and loyalty. However, Typhoid Mary was not even the most lethal carrier of the typhoid germ in New York City’s history. In 1922, New Yorker Tony Labella, a food worker, reportedly caused two outbreaks that combined for more than 100 cases and five deaths.

Corona virus infection also follows a highly variable pattern; from asymptomatic carrier, to pneumonia / heart disease / kidney disease to cytokine storm leading to ARDS / multi-organ failure to even death. However, vast majority of patients with COVID disease may remain asymptomatic or mildly symptomatic. In cases such as these there is no way of knowing whether one is a healthy carrier or not, unless COVID testing is performed each and every time. In Typhoid May’s case nobody took pains to explain her concept of ‘healthy carrier’ or perhaps she was not educated enough to understand it. But doctors, nurses and generally all front-line workers are educated enough to understand it. Vaccination is a strategy which not only provides individual protection and herd immunity but also prevents the ‘healthy carrier’ state from occurring.  Thus it should be a shared responsibility of many stake-holders to get health-care professionals and other front-line workers vaccinated.

‘Hey doctor, Are you COVID vaccinated?’