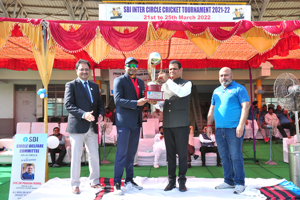 State Bank of India, Local Head Office, New Delhi organized Inter Circle Cricket Tournament from 21.03.2022 to 25.03.2022. Teams from all sixteen Circles of SBI pan India participated in the tournament. The programme was inaugurated by Sh. Shriram P. Iyer, General Manager NW-III, Delhi Circle on 21st March 2022 at Hotel Royal Plaza, Ashoka Road, New Delhi. The occasion was also graced by the General Managers NW-I Sh. A. S. Paul & NW-II Sh. Abhay Singh. Sh. Iyer addressed the gathering during the opening ceremony with great enthusiasm. He set the ball rolling by emphasizing the importance of fitness and health for one and all. He highlighted the significance of such events and activities that provide a platform to the Bank’s employees to participate in sports activities and have a healthy and balanced life. The teams were also addressed by Sh. Paul and Sh. Abhay Singh who shared their views and boosted the spirits of the players with their motivational and encouraging words. The address was followed by Oath taking ceremony when all the Team Captains took Oath to have a fair play abiding by the rules of the game. The teams were wished good luck by all and the environment was charged-up with excitement. The players were thrilled with the enthusiasm of the crowd for the upcoming matches. 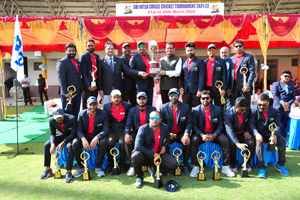 The tournament continued for five days unfurling endless fun, entertainment, and excitement in the ensuing days. There was a close competition amongst the teams of Bengaluru V/sHyderabad andBhopal V/sKerala in the Semi Finals. After a crucial final match amongst Hyderabad &Kerala, Team Hyderabademerged as the winner of the finals. The closing ceremony of the 5-day energy packed event was held at Nawab Mansoor Ali Khan Pataudi Sports Complex, New Delhi on 25th March 2022. Chief Guest Sh. Om Prakash Mishra, Deputy Managing Director (HR) & Corporate Development Officer, Corporate Centre, Mumbai graced the occasion by his esteemed presence. He congratulated the winning team ofHyderabadCircle and appreciated the commendable performance displayed by the players of all the teams. He praised the dedicated approach, team spirit and sportsmanship of all the players who had participated in making this event a huge success.

The winning team ofHyderabad Circle was awarded the trophy by the Chief Guest amongst huge applaud and cheers. The felicitation continued by presenting participation trophy/certificate to all the individual players of all the teams and momento to all the support staff. The grand event was thus concluded after a phenomenal tournament.

State Bank of India has been undertaking various measures for the welfare of its staff. Conducting such sports events and activities is one of the initiatives aiming at a healthy staff happy staff concept. The basic and implied concern of the Bank behind such endeavors is that a satisfied and content employee will be more productive and in turn will make Bank more enriched.