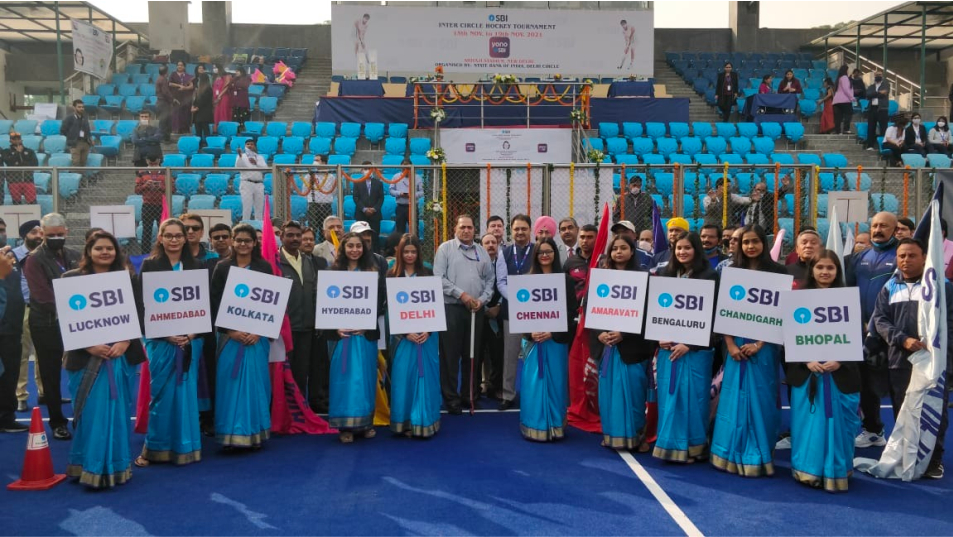 State Bank of India, Local Head Office, New Delhi, organized Inter Circle Hockey Tournament from 15.11.2021 to 19.11.2021. Ten Circle teams of the Bank participated in the tournament. The program was inaugurated by Shri Amitava Chatterjee, Chief General Manager, Delhi Circle. In his keynote address, Shri Chatterjee was delighted to host the event in Delhi Circle. He highlighted the importance of taking care of one’s health while balancing work and home. He motivated the staff members to inculcate a healthy lifestyle and be more involved in playing sports. The euphoria of emotion and excitement could be witnessed in the opening ceremony of the event as the fans shared their excitement for what they saw on the field when the host team Delhi defeated team Kolkata in the first match of the tournament.

The closing ceremony of the 5 day event was held on 19th November 2021 after a great game hockey was witnessed in the final match. Chief Guest, Shri Amitava Chatterjee, Chief General Manager, Delhi Circle was present along with General Manager Shri Shriram P Iyer and General Manager Shri Abhay Singh, Delhi Circle along with senior dignitaries from Corporate Centre Mumbai. Shri Chatterjee congratulated the players for their discipline, determination, aspiration, and sportsmanship. He encouraged and motivated the teams to pass on their skills to the next generation to make them better, fitter, and healthier. The winners Chennai Circle lifted the grand trophy after defeating Bengaluru Circle with a total score tally of 1-0. As the curtains come down on the SBI Inter Circle Hockey Tournament, all the individual players of participating teams were felicitated with a participation trophy and all the support staff were presented with a memento.

State Bank of India has always placed wellbeing of its employees at the center of its interests. By promoting such activities, the Bank aims to increase and strengthen the engagement of its personnel ensuring a positive corporate climate and guaranteeing social wellbeing of the employees and self-efficacy at both individual and collective levels in line with business objectives.