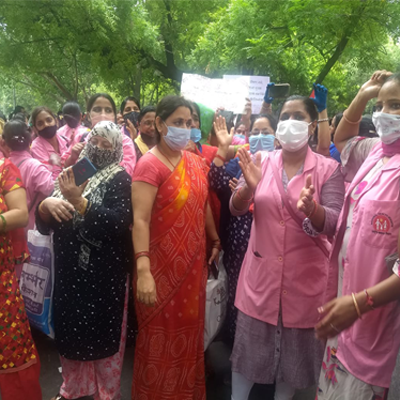 The working class under the banner of Joint Platform of Central Trade Union organisations and Sectoral Federations and Associations observed 9th August as “Save India Day” organising nationwide action programmes of Satyagrah, jail bharo, processions, public rallies as a massive success throughout the country, in all workplaces and centres as a united struggle of Non-Cooperation and Defiance to anti-worker, anti-farmer, anti-people and anti-national policies of the Govt. The action programmes were organised in almost all the states in the workplaces, union offices, on roads & streets including processions, cycle and motorbike rallies, public meetings. The programmes organised on more than one lakh places were participated by more than one crore people today. There were programmes in some states yesterday and in some other states will be held tomorrow.

The national leaders while addressing the gathering at Jantar Mantar said that with the opening up of some industrial units, all workers are not being taken back, only a small percentage is finding their place back in jobs and that also on reduced wages and refusal to pay lockdown period salary. Such denial of employment, and pressing for wage-reduction have to be unitedly combated. The MSMEs themselves are reporting that 30% to 35% units may not be in position to start their activities. The unemployment rate is high and joblosses continue. That the malnutrition would increase, hunger deaths would become a daily reality, and there is real threat of depression resulting in suicides amongst workers say the eminent scientists & medical experts. All these issues are enraging workers.

They said that the Government not only failed in taking necessary steps to contain the pandemic in time having wasted four precious months, imposed unplanned lockdown with short notice bringing in severe miseries to the people specially the migrant labour, failed in taking essential steps for upgrading health system and providing the safety equipments to front line warriors, it not only failed to recognise the immense services provided by employees of Railways, Defence, Banks, Insurance, Telecom, Postal and other sector providing essential services during lockdown period, but did not address the problems they faced,  it faultered in dealing  with the problem of COVID-19 as law & order issue instead of treating it as medical emergency for the human beings and society. It has caused immense miseries to millions of workers, farmers and other vulnerable sections of the society, whereas, Government stood only by the Corporates & big businesses.

The CTUs reiterated their opposition to disinvestment and wholesale privatisation of Public Sector Enterprises, entry of FDI in core sectors up to the tune of 100 per cent – Indian railways, Defence, Port and Dock, Coal, Air India, Banks, Insurance telecom, power, postal including of Privatisation of Space Science & Atomic Energy etc., Public sector banks, insurance, and other financial sectors are also being targeted for large-scale privatisation. Steps in favour of Corporates of Indian & Foreign brands to usurp natural resources and business of the country while mouthing the slogan of Aatma-Nirbhar Bharat are being pushed through shamelessly. The decision of DA freeze of 48 lakh Central Government Employees and DR freeze of 68 lakh pensioners, which is also having impact on the state government employees, is not withdrawn despite vehement opposition from Government employees and CTUs. Neither the demand of cash transfer of Rs.7500/- to all non-income tax paying persons accepted. The govt. having failed in getting its own orders in regard to payment of lockdown period wages, no retrenchments and no cut in wages shamelessly withdrew its own order in the Supreme Court of India when some Employers went to court against these orders.

The Government continues with its arrogant attitude of going ahead with privatisation and sale of PSUs, and dangerously liberalizing foreign entry in vital sectors of the economy like defence production from 49 to 74% along with corporatization of 41 ordnance factories for privatization; it is also going ahead with its project of privatizing Indian Railways in phases, the latest being its destructive decision of privatizing 151 train services in highly remunerative routes to facilitate private players  to make huge profit using infrastructure and manpower of Indian Railways.  The policy of surrendering of sanctioned posts and ban of creation of new jobs in various government departments continues in detriment to the young aspirants for jobs. On the top of it the continuous price-rise of essential commodities are adding to the miseries of common man.

A Government which has no respect and concern, towards the rights and basic survival-entitlements of workers and the people, does not deserve any co-operation. We the workers/employees and trade unions need to do everything possible to be in solidarity with each other, unitedly face the disease taking all precautions necessary, stand with each other to defend our rights of unionization, collective bargaining, decent working condition, wages & future securities etc. This Govt has demonstrated cruel insensitivity of the basic human needs of the workers and people. This cannot be endorsed and cooperated with