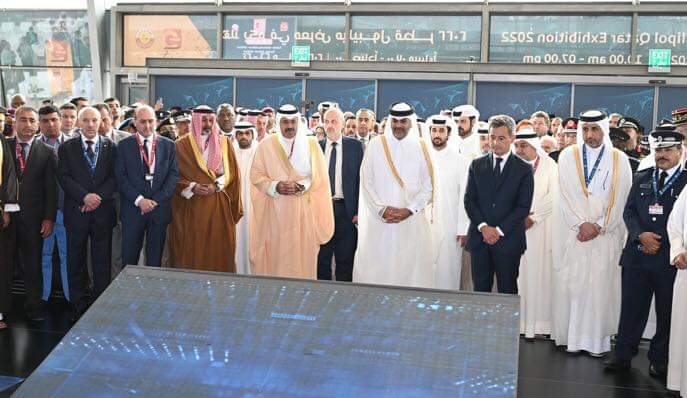 Doha, May 24 (QNA) :  Under the patronage of HH the Amir Sheikh Tamim bin Hamad Al-Thani, HE Prime Minister and Minister of Interior Sheikh Khalid bin Khalifa bin Abdulaziz Al-Thani inaugurated Tuesday morning the 14th edition of Milipol Qatar 2022, an international event for homeland security and civil defense. The three-day exhibition will be held at the Doha Exhibition and Convention Center (DECC).

After the opening, HE Prime Minister and Minister of Interior took a tour in the exhibition’s various sections, during which he was briefed on the latest equipment and devices on display, services and innovative systems in the field of internal security and civil defense. His Excellency was also briefed on an explanation of the characteristics of the new security systems, their tasks and advanced technologies, the nature of their integration, and their roles in enhancing internal security, as well as preventing crimes before their occurrence. 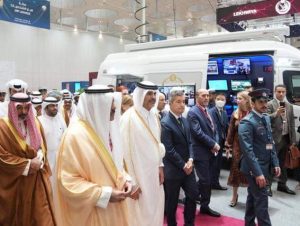 HE Prime Minister and Minister of Interior launched a number of projects and buildings affiliated to several security and service departments at the Ministry of Interior, in addition to 17 new electronic services on the Metrash2 application, the digital identity card application, and the early warning system to respond to emergencies. (QNA)

The exhibition allows companies to showcase their latest innovations in various security and civil defense sectors, defense solutions and equipment, communications and rescue technology and security, law enforcement products, communications software, and others. The Milipol Qatar exhibition, which is organized every two years, together with Milipol Paris, constitutes a leading international partnership, and is considered one of the exhibitions specialized in providing services, technologies, and innovations in the security sector, seminars held on its sidelines on cyber security and the security of major events in the presence of a group of international experts.

In a press statement on the sidelines of the opening of the exhibition, HE Undersecretary of the Ministry of Interior Major General Abdulaziz bin Faisal Al-Thani stressed that the International Event for Homeland Security and Civil Defense (Milipol Qatar 2022) represents an international platform and a Qatari imprint in the field of security industries and exhibitions at the level of the Middle East and North Africa, praising the level of attendance and the development of exhibitors who participate with the latest and best products at the local, regional and international levels.

HE considered that the exhibition is important to the authorities concerned with security in many countries of the world, including the Qatari Ministry of Interior, through which the Ministry is aware of the development in the field of modern security technologies in the world. It also represents an opportunity to learn about advanced devices and their suitability for the security tasks they undertake, stressing that the State of Qatar is one of the safest and most secure countries in the world according to the indicators and standards of the relevant international institutions, and in accordance with the reality the country is witnessing thanks to the insightful vision of HH the Amir Sheikh Tamim bin Hamad Al-Thani, noting that the Ministry of Interior operates according to an integrated system and a strategic vision that sets the highest standards of security and safety and applies them with a high level of professionalism, wishing Milipol exhibition and all the guests success.

HE Director of Public Security Major General Saad bin Jassim Al Khulaifi, praised the good organization of the 14th International Event of Homeland Security and Civil Defense, which is a real addition to providing security services at the region’s level with modern devices and equipment in the field of internal security, which helps in the fight against crime, noting that Milipol Qatar is one of the most important international exhibitions, not only for the State of Qatar, but for many advanced countries in the production and development of internal security systems, as well as countries that seek to acquire the best of what modern science has reached in the field of security devices and internal security systems.

The Director of Public Security also indicated that the (Milipol Qatar 2022) is the result of a distinguished and pioneering partnership with Milipol France, where the exhibition is taking advanced steps towards globalization and qualitative development in the modern equipment and devices displayed, as it was able to attract a number of countries in the world which participates in distinguished pavilions in which advanced devices in the field of internal security and civil defense systems are displayed.

He explained that the exhibition is an important platform for national and international companies to meet with decision-makers concerned with maintaining security in various countries of the world, which made it enjoy special support and care from HH the Amir Sheikh Tamim bin Hamad Al-Thani, and it was opened by HE Prime Minister and Minister of Interior Sheikh Khalid bin Khalifa bin Abdulaziz Al-Thani especially in light of this stage in which the State of Qatar is witnessing an unprecedented boom in all fields, especially in the security field, thanks to rational policies and ambitious development plans. (QNA)