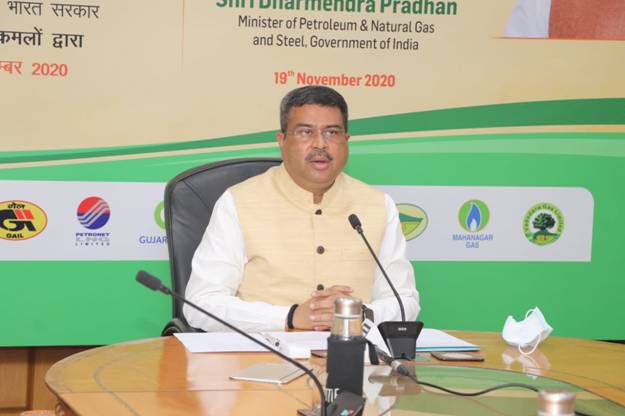 New Delh : Shri Dharmendra Pradhan, Minister of Petroleum & Natural Gas and Steel today laid the foundation stone for the first 50 LNG fueling stations, across the golden quadrilateral and major National Highways. This is part of a slew of initiatives of the Ministry of Petroleum and Natural Gas in realizing Hon’ble Prime Minister Shri Narendra Modi’s vision of transforming India into a Gas based economy. Government has identified LNG as a transport fuel as a priority area considering the potential of manifold benefits in terms of reducing vehicular pollution, saving in terms of import bill of the country and wide-ranging benefits that may accrue to fleet operators, vehicle manufacturers and other entities in the gas sector.

Polavaram Multipurpose Irrigation Project will be given necessary…

Speaking on the occasion, Shri Pradhan said that a well-thought strategy is being implemented to take the country towards the gas-based economy. In this regard, gas infrastructure is being set up, in terms of laying of pipelines, setting up of terminals, enhancing gas production, the introduction of the simple and rational tax structure. He said that LNG is going to be the fuel of the future for transport, and in this regard, retro-fitting of the vehicles, as well as development by Original equipment manufacturers, is being undertaken. The Minister said that the LNG is not only almost 40% cheaper than diesel but also causes very less pollution.  He said that the Government will set up LNG stations at the distance of 200-300 km on golden quadrilateral, and within 3 years, we will have 1000 LNG stations on all major roads, industrial hubs and mining areas. He expressed confidence that 10% of the trucks will adopt LNG as fuel. The government is working to meet the commitment made by the Hon’ble Prime Minister in COP-21 to reduce pollution. He said that the government provided 8 crore poor households with LPG connections under PMUY, and during the pandemic, 14 crore free cylinders have been distributed to help support PMUY beneficiaries. The Minister said that clean and affordable fuel has become an instrument of the welfare of people. He said that the Government will continue to promote CNG vehicles, Electric vehicles, Auto-LPG, but at the same time, LNG as long-haul fuel will be pushed. 20-25 MMSCMD equivalent LNG will come to the country, and cheaper LNG is likely to be available in the global market. He said that increased LNG consumption in the country will reduce the country’s dependence on crude oil. The Secretary, Ministry of Petroleum and Natural Gas Shri Tarun Kapoor said that the Government is making a long-term plan to promote LNG. The first trial of the fuel was started in 2015, and it is now ready to take off on the commercial scale. He expressed confidence that LNG’s use will increase and adopted for long haul trucks and buses.

These fifty LNG stations will be set up and commissioned in partnership by country’s Oil & Gas majors such as IOCL, BPCL, HPCL, GAIL, PLL, Gujarat Gas and their Joint Venture Companies and subsidiaries. Out of these 50 LNG stations, IOCL will set up 20 LNG Station, while BPCL and HPCL will set up 11 each LNG station. These 50 LNG stations are being put up at the nation’s Golden quadrilateral and major National highways where LNG is to be made available for heavy vehicles and buses.

Vigilance Awareness Week is a point where we…