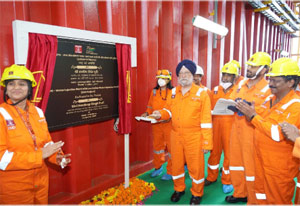 New Delhi : Hardeep Singh Puri, Minister of Petroleum & Natural Gas and Housing and Urban Affairs dedicated two major projects of ONGC to the nation at Western offshore on 23 April 2022. He was accompanied by CMD, Dr. Alka Mittal, Director (T&FS), O P Singh and Director (Offshore), Pankaj Kumar. The two projects will result in an incremental gain of 7.5 MMT of oil and more than 1 BCM of gas.

The minister expressed his appreciation for ONGC team for implementing the two projects. He exhorted ONGC to further enhance their efforts to add more oil and gas to the kitty of nation adopting accelerated exploration activities.

The state-of-the-art 8 legged water Injection-cum-Living Quarter platform has been installed as part of implementation of low salinity water flood (LSWF) process, an Enhanced Oil Recovery (EOR) pilot project, part of the Mumbai High South Redevelopment phase IV at a total CAPEX of Rs. 3740 Crores. NWIS-R installed under GoI initiatives of Enhanced Recovery (ER) Policy 2018 for oil and gas. The project will result in incremental gain of 3.20 MMT of oil and 0.571 BCM of gas. This is the first EOR project of Indian offshore. 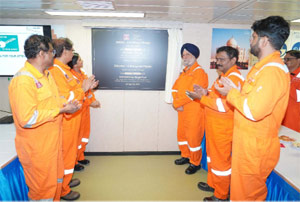 ONGC now has one of the most balanced Boards in industry

ONGC on way to add another Basin on production

The concept involves reducing the salinity of the injected sea water, which is about 28000 ppm, up to the level of 8250 ppm with a desalination plant. The mechanism of LSWF involves complex Crude Oil-Brine-Rock (COBR) interactions for improving both microscopic and macroscopic displacement efficiency.

The project has been implemented with strategic emphasis on local procurement of Rs. 1700 Crore, in line with Make in India Initiative of the government. Out of total 45 major Pumps/packages in NWIS project, 42 major Pumps Packages have been manufactured in India. 40,000 MT of Structural Steel, enough of make 5 Eiffel Towers have been used in the structure.

The cluster 8 Marginal Field development project at Mumbai High has been implemented with a total cost of Rs. 2292.46 Crores. The project will result in incremental production of 4.38 MMT of oil and 0.464 BCM of gas. These marginal fields were discovered in 2017-18 & 2018-19. CO2 mitigation system has been implemented for the first time in offshore as part of the project. The oil and gas is being evacuated through FPSO (Floating Production Storage and Offtake).