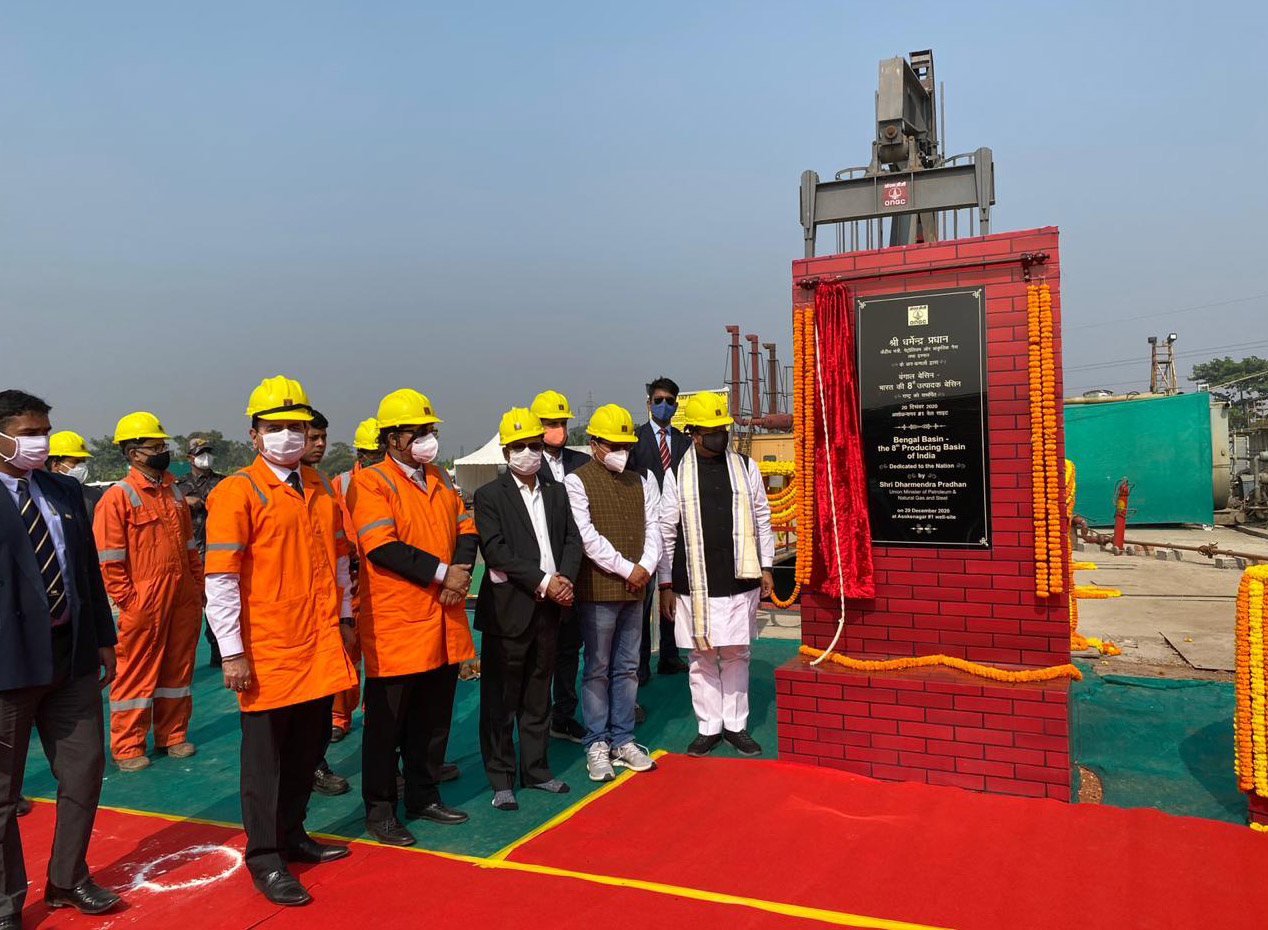 Bolstering efforts to meet one of the vital essentials, the energy need for AtmaNirbhar Bharat, Shri Dharmendra Pradhan, Minister for Petroleum & Natural Gas and Steel dedicated the Bengal Basin, the 8th producing basin of India, to the nation today on 20th December 2020 at Asokenagar, West Bengal.
ONGC took a major step by commencing oil production from the well Asokenagar-1, Bengal Basin in 24 Paragana district. The well Asoknagar-1 was completed as an oil producer under Early-Monetization Plan issued by Government of India. This makes ONGC having discovered and put to production seven out of the eight producing basins of India covering 83 per cent of established oil & gas reserves. ONGC is India’s largest oil and gas producer contributing 72 per cent of the country’s hydrocarbon production.
Shri Dharmendra Pradhan, while dedicating the Asokenagar discovery to the nation, said that the discovery would play a role for India’s energy security. He stated that the discovery would be definitely added to our commitment towards Hon’ble Prime Minister Narendra Modi’s clarion call for reducing oil import dependence.

Shri Pradhan congratulated ONGC and said that with this discovery, around seven decades of relentless endeavours by scientists and engineers of India have borne fruits, giving new hope for robust development of West Bengal. Bengal Basin finally looks set to find a place on the oil & gas map of the world.

He said that the Indian government is committed to fully support ONGC to make this a turning point in its strive to bring more oil and gas from the subsurface of West Bengal and help to bring a new phase of prosperity for the state and its people along-with local employment. He further added that the formal dedication of production site to the nation today marks this as a moment of national pride and a gift from the soil of West Bengal to India.

The well Asokenagar-1 has heralded the end of the painstaking search for hydrocarbons in the region by ONGC by sending its first hydrocarbon consignment produced during well testing to IOCL’s Haldia Oil Refinery done earlier on 5 November 2020.
Re-energized by this discovery and eager to script more success stories in the newly awarded OALP acreages in the Bengal Basin, ONGC has already set aside a sling of fresh geoscientific activities. These comprise an appraisal programme of Asokenagar discovery for an area of about 739 sq. km. including 3D seismic, Low-Frequency Passive Seismic (LFPS) Survey and drilling of two wells, besides acquiring roughly 1300 LKM of 2D, 2900 SKM of 3D and drilling of 13 wells in the next three years in the newly awarded acreages. Bengal Basin is spread across nearly 1.22 lakh square kilometres, with nearly two-thirds of it falling under the waters of the Bay of Bengal. Till now, ONGC has invested Rs. 3361 Crore to explore hydrocarbon in the Bengal Basin. Rs. 425 Crore will be spent on exploration activities in the basin in the coming two years.
Shri Pradhan was accompanied by Shri Jyotirmay Singh Mahato, Member of Parliament, Lok Sabha, Shri Shashi Shanker, CMD, ONGC and Directors of ONGC during the event held at the production site of Asokenagar, around 50 Km from state capital Kolkata. Shri Pradhan commenced the formal production of oil by switching on the Sucker Rod Pump (SRP) amidst a select gathering of senior officials, following Covid protocols.
Hon’ble Minister also visited the geophysical party camp and witnessed the seismic data collection being done for appraisal program of Asokenagar block.