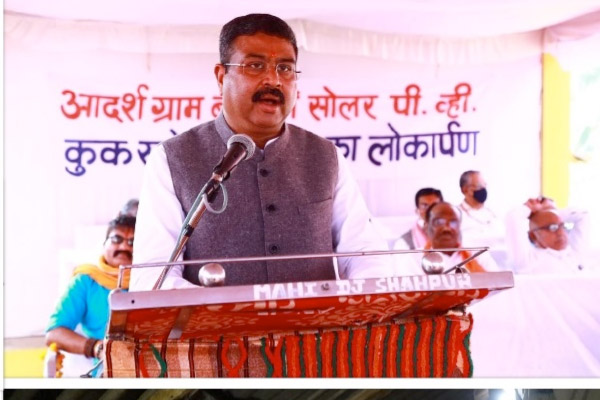 (ONGC)In line with Prime Minister Narendra Modi’s vision to increase the use of renewable energy and making India Atmanirbhar,  two projects supported by Energy Maharatna Oil and Natural Gas Corporation Limited (ONGC) for the welfare of people in Betul district of Madhya Pradesh were launched by Minister of Petroleum and Natural Gas and Steel Dharmendra Pradhan on 18 January 2021. The Minister laid the foundation stone of a hostel-cum-training facility for farmers at Bharat Bharati Shiksha Samiti; he also launched the distribution of Solar Chulhas to poor households in Betul, which is being developed as a solar village. ONGC has got solar chulhas designed and developed through IIT Bombay, at an investment of around ninety lakh rupees. The Minister launched the distributed of 86 Solar PV Cook-Stove to poor households in the district: 74 were distributed to households of Bacha Gram Panchayat in Ghodadongri Tehsil of Baitul District, 12 in Jamthi village school. All the beneficiaries belonged to the poor and underprivileged section of the society.

A Solar PV cooker stove project has been set up in Bacha village of Betul district in Madhya Pradesh, by Bharat Bharati Shiksha Samiti with the help of ONGC and IIT Bombay. The project was inaugurated by Minister of Petroleum and Natural Gas and Steel Dharmendra Pradhan on 18 January 2021. The two-floor (G+1) hostel-cum-training facility, being built at an investment of around three crore rupees, will be used to train poor farmers in organic farming. The structure is being built on a 3.45-acre land in the campus of Bharat Bharati Siksha Samiti. Around 15,000 to 20,000 poor farmers will benefit from this ONGC welfare project. The Minister of Petroleum & Natural Gas and Steel Dharmendra Pradhan laid the foundation stone of this facility.