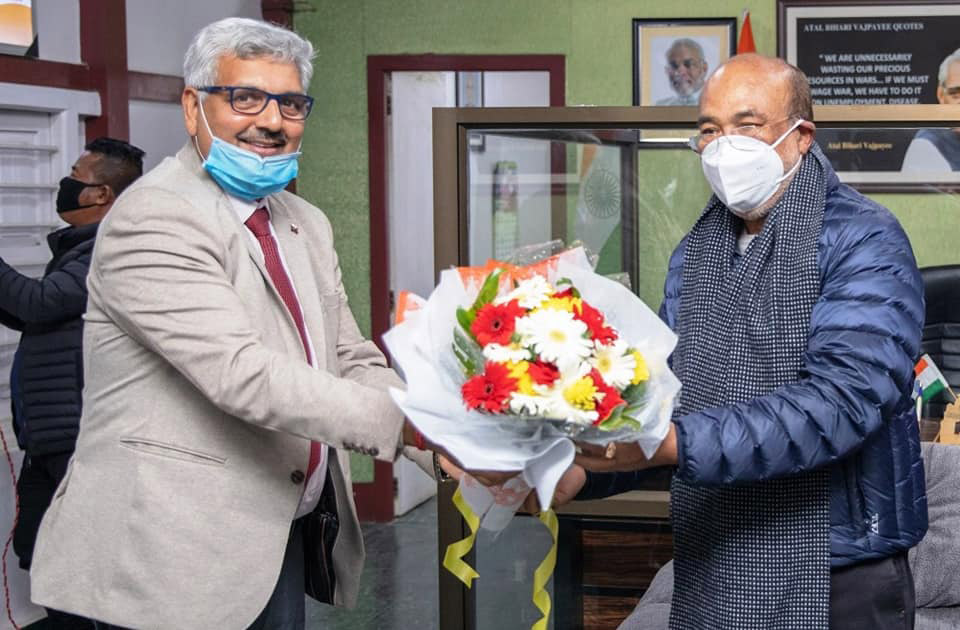 Shri A.K. Singh, Chairman & Managing Director, NHPC Limited along with Shri Yamuna Kumar Chaubey, Director (Technical), NHPC met Chief Minister of Manipur on 24th December at his official residence at Imphal in the presence of Chief Secretary. During the meeting, the Hon’ble CM was briefed about the status of upcoming Loktak Downstream Hydroelectric Project which is being taken up by LDHCL, a joint venture of Govt. of Manipur and NHPC. The upcoming project will be 66 MW capacity which is located at Taosang Village, Money District. The Power Purchase Agreement (PPA)for this project which was signed on 31st August 2020 between NHPC and MSPDCL. Now the project is in an advance stage awaiting PIB and CCEA clearances and Land Acquisition for the project needs to be completed at the earliest. Regarding land acquisition, the Hon’ble Chief Minister has assured the CMD for expediting the process and assist in any way he can to complete the process at the earliest. Further, both the dignitaries also discussed exploring the hydro potential of Manipur for which the NHPC has proposed for taking up new projects to make the state of Manipur Power sufficient.

The CMD and Director (Technical) also met Hon’ble Power Minister Shri Th. Bishwajit Singh and discussed the upcoming project and overall power scenario of Manipur.  The Power Minister assured extending all the help to start and complete this project. The Hon’ble Minister showed his keen interest to start the Tipaimukh Project. A separate meeting with Chief Secretary has held wherein the issues of pending PIB and CCEA clearances of Loktak Downstream Project (66 MW) were discussed.

On meeting all the three dignitaries, it was assured to extend all support to complete the upcoming Loktak downstream project. CMD also mentioned that lot many parties and good companies have participated in a pre-bid meeting of Loktak downstream. Though, good contractors are still hesitant for participation. However, all are being pursued to participate in final bidding. It was assured during the meeting that there is no problem to start and working in any project in Manipur now. Some People are going by perception, which is not true. This project will be a big boost for development and improving the power scenario of the state. NHPC Limited presently has an installation base of 7071.2 MW from 24 power stations on ownership basis including projects taken up in Joint Venture. Loktak Power Station in Manipur is being operated by NHPC since 1983 with the installed capacity of 105 MW.