Our aim is to reach 10,000 CNG stations and 5 crore PNG connections in coming 7-8 years: Dharmendra Pradhan

54 CNG stations of Indraprastha Gas Limited dedicated to the service of the community – 21 in Delhi, 16 in Haryana, 15 in Uttar Pradesh and 2 in Rajasthan Union Minister of Petroleum and Natural Gas inaugurates India’s First CNG Mobile Refuelling Units 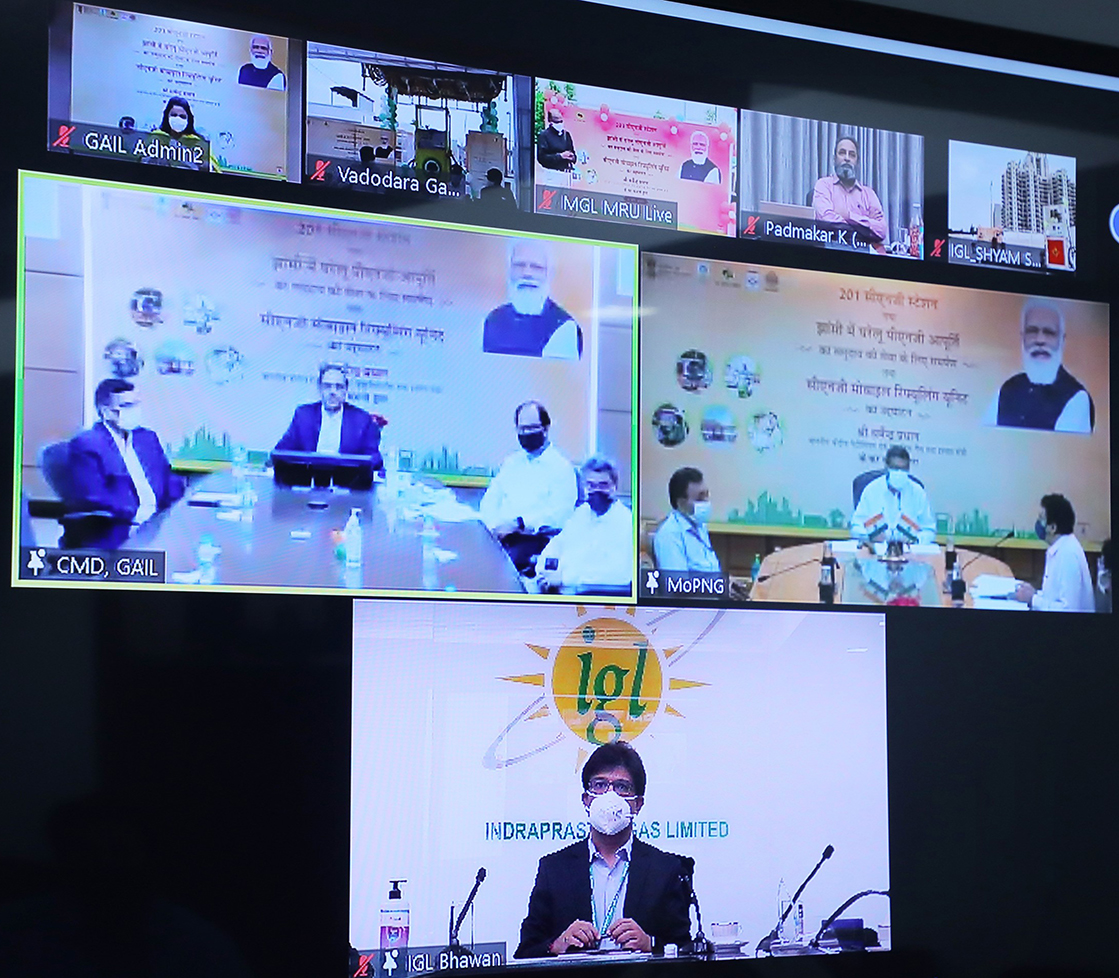 New Delhi;  Adding another dimension to expanding the reach of environment friendly Compressed Natural Gas to the doorstep of the customers, Union Minister of Petroleum and Natural Gas & Steel, Shri Dharmendra Pradhan, through an online ceremony,  inaugurated India’s first CNG Mobile Refuelling Unit (MRU) developed by Indraprastha Gas Limited (IGL), India’s largest CNG distribution company. He also dedicated to the nation a total of 201 CNG stations in the country, out of which 54 have been set up by IGL. These 54 CNG stations of IGL are spread over 4 States/UTs –Delhi, Haryana, Rajasthan and Uttar Pradesh. 21 of these stations are located in Delhi, 6 in Ghaziabad, 6 in Gurugram, 4 in Karnal, 3 in Kaithal, 3 in Rewari, 4 in Kanpur, 2 in Meerut, 2 in Gautam Budh Nagar, 1 in Hapur and 2 in Ajmer. The minister also inaugurated PNG supply in Jhansi and another MRU developed by MGL during the function. 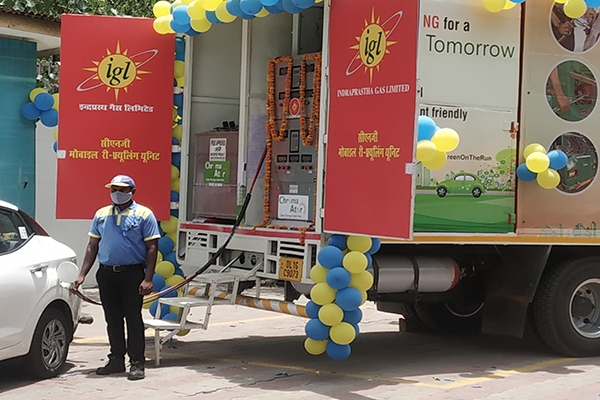 Asserting that the future of fuel retail is mobile, Shri Pradhan spoke about various measures to give boost to this ecosystem including setting up mobile refilling CNG facility. He also outlined the benefits of mobile fuel retailing which includes cost advantage as well as advantage in terms of reaching out to consumers at shopping malls, offices and other places. He also said that going forward, mobile battery swapping should also be explored. “We are bringing in innovation in energy retailing and making it mobile and delivering at the doorsteps”, Shri Pradhan added. Shri Pradhan said that CGD sector has emerged as a major sector for natural gas consumption. The demand is only going to increase as more GAs become operational. He exhorted the CGD entities to keep working hard to reach 10,000 CNG stations and 5 crore PNG connections in coming 7-8 years. He said that there is a need for conversion of diesel/petrol vehicles to CNG/LNG for ensuring lesser emissions and cleaner environment. In that direction, Mobile Refueling Unit (MRU) will help achieve supply of CNG in areas not yet connected through pipelines or at places where there is scarcity of land parcels to set up conventional CNG stations. He stressed upon the need to expedite commissioning of more MRUs in the Country to increase mobility of fuel availability through their deployment at various locations.

Explaining the salient features of MRU subsequent to the ceremony, Mr Amit Garg, Director (Commercial), IGL said, “The concept of MRUs shall go a long way in enhancing the customer experience when CNG fueling facility would be available at the doorstep”. He thanked the minister for his visionary idea of developing MRUs, which has seen light of the day today.

Mr Garg informed that IGL had showcased a prototype of MRU for the first time during National Conclave on Emerging Opportunities in Natural Gas Sector on 23rd January 2021. Subsequently, taking inputs from all the stakeholders including Petroleum and Explosive Safety Organisation, IGL had embarked on developing the first model, which has been approved by PESO. He highlighted that MRU developed by IGL is fitted with 55 lightweight Type IV Cylinders, which can store upto 1500 kg CNG and fill 150 to 200 vehicles in a day.

Lauding Team IGL for its efforts, Mr. Garg, remarked that IGL has always been at the forefront in the CGD sector and the number of stations of IGL dedicated to the community today out of the total bear testimony to this fact. He thanked the team for once again proving to be the pioneer in the industry by translating the idea of MRU into reality on ground.