IGL to continue its growth efforts despite COVID – 19 challenges 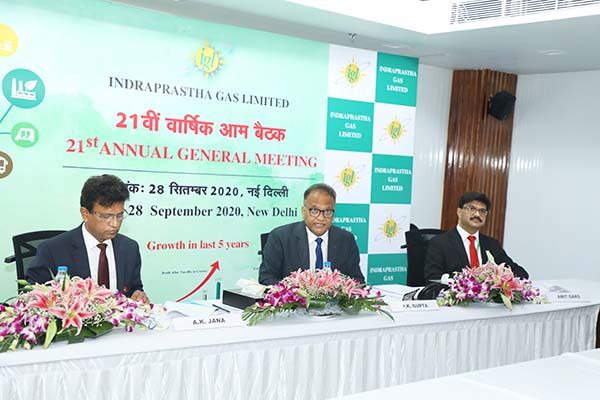 New Delhi,: In line with the massive push by the government to expand CNG and PNG infrastructure across the country, Indraprastha Gas Limited (IGL), provided record number of 2.72 lakh new PNG connections in 2019-20 in its areas of operation. In addition to the above, 55 new CNG stations had been set up during this period, thereby taking the total number of CNG stations set up by IGL to 555. This was announced by Mr. P.K. Gupta, Chairman, IGL, while addressing the shareholders at the 21st Annual General Meeting of the company in New Delhi today through virtual mode.

Mr Gupta also gave an overview of future plans of the organization involving consolidation of its presence in existing areas as well as expansion in new geographical areas. He disclosed that IGL has been aligning its strategy to seize the emerging opportunities in the CGD sector and to meet the future challenges.  Reiterating IGL’s commitment to maintain uninterrupted gas supply to its customers despite the challenges in thecurrent Financial Year due to onset of Pandemic Covid-19, Mr Gupta assured the shareholders that IGL will continue its best efforts for growth and expansion of its network.

Mr. Gupta also disclosed that IGL has drawn up plans to set up new CNG stations and create pipeline infrastructure in its current areas of operations as well as newly acquired areas. He added that the price differential of CNG versus alternate fuel, spread of CNG infrastructure in new geographical areas and building of green corridors will continue to drive the conversion of petrol driven private vehicles to CNG mode. While explaining the progress on the PNG front, he stressed that IGL is aiming to improve upon its record in domestic PNG connections with stiff targets.

Speaking about the supply of natural gas to industrial sector, Mr Gupta expressed confidence that directions of judiciary and statutory authorities to replace Furnace Oil (FO) & Petcoke with Natural Gas shall continue to drive growth in this segment. He informed that IGL is also working on plans to setup LNG/LCNG stations, provide consultancy services in setting up CGD projects, manufacturing of gas meters, promote uses of natural gas in home appliances and also explore new business avenues.

Highlighting the customer centric approach adopted by IGL across its operations, Mr Gupta shared that IGL is making conscious efforts to upgrade its services by leveraging information technology in all its customer operations. He also shared the initiatives undertaken in the areas of Health Safety and Environment as well as CSR. Also present on the occasion through virtual mode were Mr. A.K. Jana, Managing Director, Mr. Amit Garg, Director (Commercial) and other directors of the company.

The shareholders approved the dividend of 140% in Annual General Meeting to be paid to shareowners as recommended by the Board of Directors.