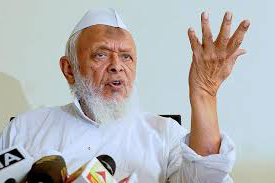 New Delhi: Jamiat Ulama-i-Hind (JUH) president Maulana Syed Arshad Madani on Wednesday condemned the News18 anchor Amish Devgan in the strongest possible terms for his derogatory remarks against Sheikh Khwaja Moinuddin Chisti. Slamming a section of print and electronic media for spreading misinformation and ignoring real issues of the country, Jamiat chief also strongly demanded stern action against such errant media persons who are creating fissures in society. He alleged that they (media persons) have been emboldened to indulge in such unethical journalism practice because of patronage they are enjoying from some people in the government.

In a statement on the distasteful comments by the TV 18 journalist, Maulana Madani said it is unfortunate that the TV channels are stooping to such a low mere for enhancing their TRP. Referring to the ongoing hearing on the petition filed by Jamiat Ualam-i-Hind in Supreme Court seeking directions on the spread of fake news and communalisation of news, Jamiat chief said in spite of the case, TV news anchors are not refraining from hurting the sentiments of the Muslim community. This shows that they (anchors) are under the patronage and protection of the people in government who do not have any fear of law and indulging in unethical and corrupt journalism in order to please their masters and to divert the attention of common man from his/ her burning issues.

“They (certain TV journalists and channels) have so emboldened to an extent that they are now targeting mosques, madrassas and dargahs (shrines) who use to attack Muslims, Islam, and their civilization and organizations to demonize the community in the eyes of fellow countrymen.

Wall of Farmers has been established at Ghazipur Border…

Our legal struggle will continue for justice to all innocent…

Maulana Madani said News 18 anchor Amish Devgan committed a serious offence by using nasty and derogatory language against the reverend saint Hazrat Khawaja Moinuddin Chishti and hurts the feelings of not only India Muslims but also the entire Islamic world as and a large section of Hindus in India as well who revered him. He underlined that Khawaja Moinuddin Chishti holds a unique position in the entire subcontinent that was a great preacher of love and peace and embodiment of Islamic teachings and human values and an undisputed spiritual leader.

People revered Khawaja Moinuddin Chishti irrespective of their religious affiliation and visit his shrine to pay their respect and homage, he added. To use such filthy and foul language against such a person who is loved and respected by all is also the violation of the constitution values, therefore, the incident deserves severe condemnation and the government should immediately take action against the anchor and the channel, Maulana Madani said.Although, the said anchor has tendered the apology, this is not the first time he used such offensive language as he is a known habitual offender to create a communal rift in the society. A First Information Report (FIR) has been also filed against News18 anchor that during a show that was aired on June 16 referred to the revered Saint Chishti as “Lutera” Chishti.

In this context, Jamiat is of the view that mere apology is not enough and he should be meted out justice which would set an example for others.It is to be mentioned that the Jamiat Ulama-i-Hind has filed a petition in the Supreme Court against a section of print and electronic media who is running a vilification campaign against the Muslim community by spreading false and fake news. The court has fixed the next hearing of the case on Friday, June 19. Jamiat has also decided to club this incident of blasphemy in the petition as Hazrat Khawaja Ajmeri was one of the most outstanding saints of the Indian subcontinent, and indeed an international spiritual inspiration who lived during the 6th Century AH (12th Century AD). Jamiat has approached a noted lawyer and President of the Supreme Court Bar Council, Dushyant Dave in this regard