Freedom of Speech is one of the most abused freedoms in recent times and The affidavit submitted is Extremely Evasive, Brazenly Short Of Details: CJI Pulls Up Centre We are not against freedom of expression but against negative reporting: Maulana Arshad Madani 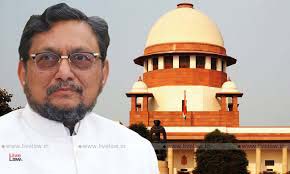 New Delhi : “Freedom of Speech is one of the most abused freedoms in recent times and the affidavit submitted is Extremely Evasive, Brazenly Short Of Details”, Chief Justice of India SA Bobde made this scathing remark today during a hearing a petition which had been filed in the Supreme Court on the direction of the President of the Jamiat Ulama-i-Hind against the TV channels and print media which tried to link the coronavirus to the Nizamuddin Markaz, and deliberately conspire to tarnish the image of Muslims, especially those belonging to the Tablighi Jamaat, and to spread hatred between Hindus and Muslims.
A three-judge bench headed by the Chief Justice of India today heard the petition. When the matter was taken up for hearing today, CJI Bobde said, You cannot treat the Court how you are treating it. Chief Justice of India SA Bobde pulled up Solicitor General Tushar Mehta for filing an affidavit stating that there “were no instances of bad reporting” regarding the communalization of the Tablighi Jamaat issue. The Court also asked why the affidavit filed by the Centre was filed by a junior-level officer and termed it as being “evasive and brazen”.
Senior Advocate Dushyant Dave pointed out to the affidavit filed by the Centre and added that the Centre had taken a stand that the instant petitions were an attempt at muzzling Freedom of speech. On the contrary, we request the court to ban the TV channels which tried to defame the Tablighi Jamaat and Muslims. The matter was heard through video conferencing during which Advocate Ejaz Maqbool (Advocate on Record) and his assistant lawyers were present to assist Senior Advocate Dushyant Dave. 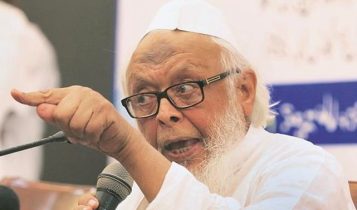 Reacting to the legal developments today, the President of Jamiat Ulama-i-Hind, Maulana Arshad Madani, said that the statements made by Chief Justice of India SA Bobde during today’s hearing and which he sought clarification fully supported our position. He said that the filing of an incomplete affidavit by the central government on the basis of conspiracy at the request of the court was a clear proof that the intention of the government was flawed and it did not want to take any action against the biased media.

He said that the Solicitor General of India was trying to misinterpret what the Jamiat Ulema-i-Hind had said in its petition with evidence, and there was a deliberate attempt to give a similar impression in the affidavit filed by the Center that the petitioner wants to restrict the freedom of speech by filing such a petition. However, the truth is that there is no such thing as restricting freedom of speech in the petition. Rather, it has been said that news channels which conspire day and night to incite sectarian hatred in the country by systematically targeting a particular nation through their vicious and one-sided reporting should be banned and a complete guideline should be set for them.
Maulana Madani said that it is very pleasing that the Chief Justice of India has said in his remarks what Jamiat Ulama-i-Hind should have said in this regard.
Maulana Madani further said that the constitution has given complete freedom of speech to every citizen of the country and we totally agree with it. But if this freedom of speech is deliberately made to assassinate a sect or community, or it is used to spread exploitation, then we are strongly opposed to it. There is a complete explanation of this in the constitution
Referring to the recent incident in Hathras, he said that a girl is humiliated badly, she faced severe mental and physical torture and even later she dies in the hospital. But even in this case, the country’s biased media seems to be looking for Hindu-Muslim angle. It is said that under the guise of this incident, there has been an international conspiracy to cause massive riots in Uttar Pradesh.
And now attempts have now been made to make the conspiracy a reality by arresting some Muslim journalists who came from Kerala to report the incident and since then the attitude of most news channels has changed. Instead of giving justice to the victim, the news channel trying their best to give it the colour of Hindu-Muslim. Maulana Madani said that even after all this, the media is not ready to come to the right path. However, the harsh remarks made by the Chief Justice of India today, there is a strong possibility that soon a positive decision will come.