BALCO organised first ever Virtual Meet with its business partners 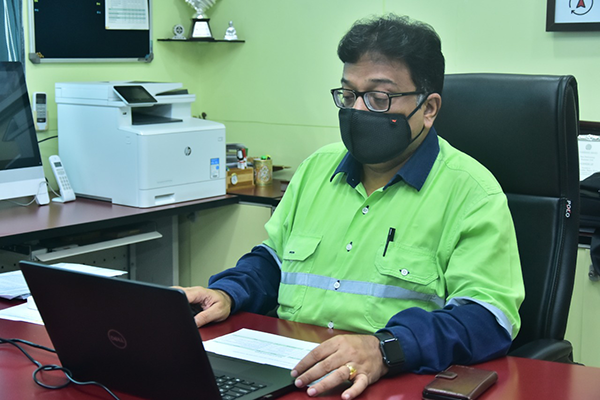 Korba. Bharat Aluminium Company Limited (BALCO) held virtual meetings with business partners with the aim of strengthening mutual harmony, trust and solidarity. In his message, Mr. Abhijit Pati, Chief Executive Officer and Director of BALCO, called upon the business partners giving the message of being together and taking the country towards greater heights in the field of aluminium production and industrial superiority, working towards increasing the per capita aluminium consumption of the country.
Addressing the audience of the Townhall session, Mr. Abhijit Pati, CEO & Director, BALCO said: “The best management and governance will lead us towards our goals. Business partners have an important role in BALCO’s progress. BALCO was the second company in the country to be established for self-sufficiency in the aluminium sector. This company expanded and with the investment of Vedanta group, the production capacity of BALCO has reached 5.70 lakh tonnes per year today. BALCO was the first public sector company in the country to be disinvested by the government. In the two decades of disinvestment, BALCO recorded rapid growth. By the year 2005, the production capacity of BALCO increased by three and a half times to 3.45 lakh tonnes per year, while the total production capacity of BALCO has increased almost six times till now. By adopting world-class operating capabilities, BALCO proved that it is possible to rejuvenate industries with best management. The success story of BALCO is exemplary.”
The consumption of aluminium in the country is about two and a half kilograms per person per year, which can be increased to the level of consumption of 25 kg per person. High consumption of aluminium is a major indicator of the rapid pace of development. The average consumption of aluminium in the world is around 11.8 kg per person per year. Aluminium is used extensively in developed countries. US annual consumption per person is around 30.5 kg, whereas in China it is at 26 kg. Aluminium is stronger and durable in terms of metal weight. This is the reason why it is used in space industry, vehicles etc. The use of aluminium in various applications also reduces energy consumption. It has been identified as green metal due to its sustainability and repeated recycling properties.
Mr. Pati expressed confidence that with the help of excellent human resources, business-friendly environment, positive thinking and business partners, BALCO will embark on the path of sustainable progress. Integrity and moral values ​​are integral to the work culture of BALCO. Wishing the participants good health and bright future, he said that we all will win over the pandemic. During the virtual meeting, the participants were introduced to the core values ​​of Vedanta and the seven pillars of business.
In another virtual townhall organized with BALCO officials and employees, Mr. Pati urged everyone to work unitedly and contribute towards making the country self-reliant. In the areas of digitalization, innovation, industrial health, safety and environment, work is being done towards the continuous strengthening of processes. Participants were introduced to the goals for the upcoming quarters during the town hall. Various departments gave information about their performance and achievement data.