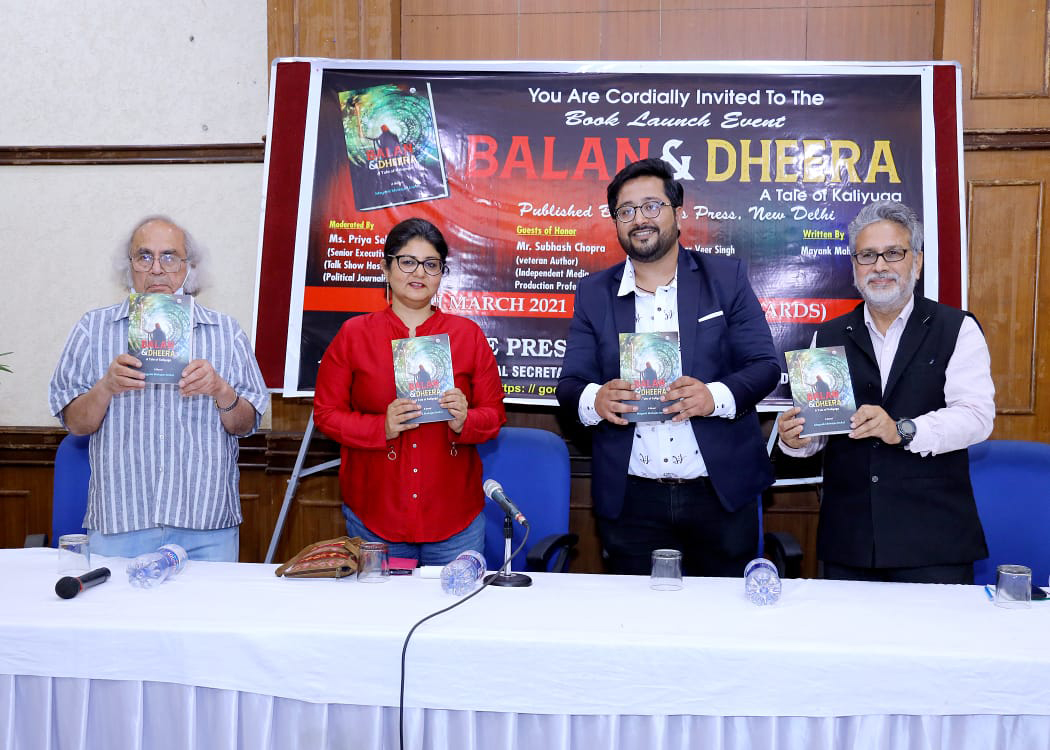 Balan and DheeraThe Indian book market has been positively flooded with every genre. More and more new talents are choosing to express their beliefs and experiences through the print media. Perhaps, the two most utilized of all genres are murder and mythology. When these two elements are mixed together, it promises to be an entertaining ride.

Balan and Dheera – A Tale of Kaliyuga is the new addition to the list. The story has been crafted carefully around a series of murders that happen throughout the country. It puts the bravest of the police officers on the chase of a maniac, not knowing what chaos they are stepping into. The book gradually reveals itself into a fantasy tale of mythological legends, and the cosmic judgement that awaits humanity.

Mr. Subhash Chopra, a veteran journalist and writer, shared his review of the book at the event. His take on it was – the story has been broken down into episodes of events, that promise to put the reader on an adventure filled roller-coaster of emotions. The author, Mayank Mahajan (mAx), has made sure that the readers get a fill of almost everything from the novel. He even described some chapters he found interesting, as they go very deep into the darkness that evolution has suppressed deep inside all of us. He considered the book to be a well synchronized way of telling a tale with unusually interesting developments throughout.

Every ordinary teacher around the world had the potential to become…

There has to be a common educational system across the country…

Priya Sahgal, a senior executive editor at NewsX channel and a TV show host at the same, was the moderator for the event. She herself as an author found the plot of the novel quite intriguing shared during the discussion at the event.

The author has created a blend of a thriller, that starts from reality and slowly moves into supernatural fantasy. With legends from the Indian Mythological books, to the rise and evolution of two interesting characters. The destroyer, Balan, and The Legendary Savior, Dheera. According to Mr. Umakant Lakhera, a senior journalist known for his strong analysis of a situation, appreciated the effort by the young author to add to the already budding cultural legends in the Indian book market. His opinion on the synopsis was extremely positive. During the discussion he hinted the desire of a theatrical version of the story discussed at the conference.

According to the “Early Praise for the book” from Mr. Atul K Thakur, Deputy Secretary at the PHD chambers of commerce and Industry, a non-fiction writer and a well-known columnist, the book is a remarkable beginning with a well-balanced narrative. Mr. Rashid Kidwai, an ORF commentator, an author and a journalist, praises the book to be a promising debut and should interest every lover of the genre. Balan and Dheera – A Tale of Kaliyuga is promised to be a must read for those who love fantasy, supernatural, mythological beings and constant cliffhangers.