After Railway stations, Airports are up for sale! 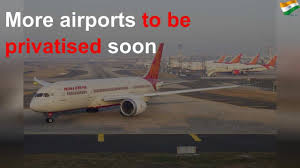 New Delhi: In February 2019, the first round of privatisation of six airports – Lucknow, Ahmedabad, Jaipur, Mangaluru, Thiruvananthapuram and Guwahati- was cleared for operation, management and development through PPP Model. In September 2019, civil aviation ministry recommended for the privatisation of 6 more airports-Amritsar, Varanasi, Bhubaneshwar, Indore, Raipur and Trichy.
Then on August 18, 2020, civil aviation minister Hardeep Singh, Puri said that his ministry would place a proposal for further privatisation of airports before the Union Cabinet.
On August 19, the Union Cabinet approved the proposal for leasing out three airports viz., Jaipur, Guwahati and Thiruvananthapuram through Public-Private Partnership (PPP). Adani group has cornered all the 12 airports so far.
Granting the airports to a single business entity and group would lead to monopoly and the group will squeeze the extra revenues from passengers and airlines. Besides, there were income leakage and loss of revenue for the Airports Authority of India through the past experiences that had happened at Mumbai and Delhi airports. Hence, this privatisation of airports should be immediately stopped as it would escalate the cost of the airline travelers and airlines as well.
The Airports authority of India owns and manages more than 100 airports across the country. None of them is making losses. The Thiruvananthpuram airport, the first international airport in independent India, makes a profit of Rs.125 cr every year. Kerala Government has offered to run it and the matter is sub-judice. Yet the Central Government is bent on preempting the Kerala Government.
As we go to the press, there is a news flash of the Government’s move to sell its stake in IRCTC as well.
AITUC condemns the Central Government’s fetish for privatisation and sale of all their assets to their cronies and warns that this step is against the interests of the ordinary commuters, and urges the Central Government to withdraw its latest proposal.