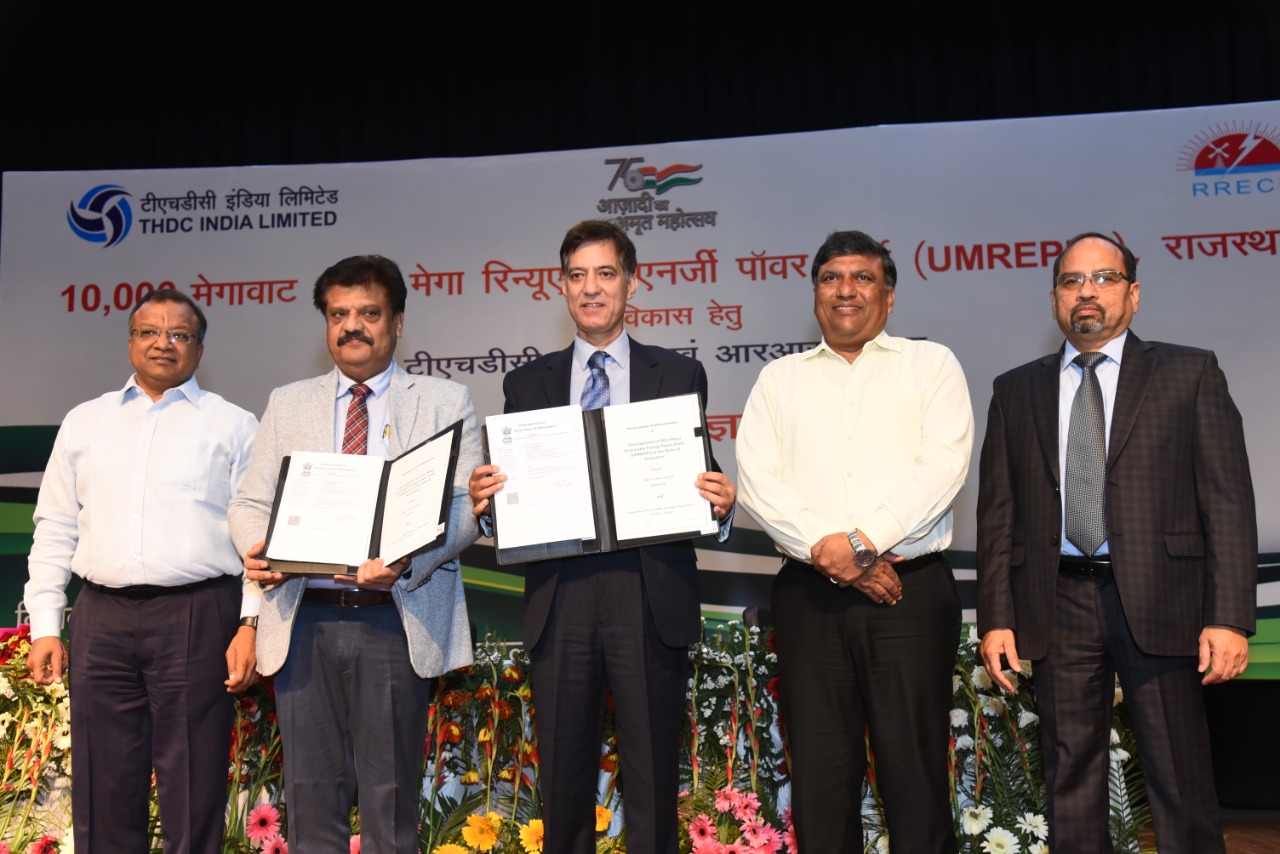 As per the MoU, THDCIL will form a Special Purpose Vehicle (SPV) with RRECL as a JV Company for the implementation of Renewable energy parks. Dr. Subodh Agarwal, Additional Chief Secretary, Energy, Mines & Petroleum Department, Rajasthan Govt. and CMD, RRECL congratulated THDCIL for its landmark initiative in the field of renewable energy and assured all possible support and cooperation for its implementation.

Sh. Rajeev Vishnoi, CMD, THDCIL while addressing during the signing ceremony stated that this is a significant achievement of the corporation in the filed of renewable energy as it will contribute towards meeting the green energy and carbon emission reduction targets of the nation. Sh. Vishnoi also congratulated the officials of THDCIL and RRECL for the successful signing of the MoU. Sh. J. Behera, D(F), THDCIL stated that this is the beginning of our mutual relationship with Rajasthan and THDCIL will continue to work with Govt. of Rajasthan to work in collaboration and partnership on many such projects in the state for meeting the energy requirements of the nation. He also highlights the expansion of business operations of the corporation in different parts of the country.

This historic MoU will contribute towards renewable energy capacity addition target of 500 MW by 2030 by Govt. of India at COP 26 and will facilitate the socio-economic development of Rajasthan by bringing cheap and environmentally friendly solar electricity in the region. Around 10,000 direct and indirect employment opportunities are also expected to be created during the construction of the Renewable energy parks which will promote local economy.

Today, THDCIL is one of the premier power generators in the country with installed capacity of 1587 MW with commissioning of Tehri Dam & HPP (1000MW), Koteshwar HEP (400MW) in Uttarakhand, Wind Power Projects of 50MW at Patan & 63MW at Dwarka in Gujarat, 24MW Dhukwan Small Hydro Project, Jhansi, Uttar Pradesh and 50 MW Solar Power Project at Kasaragod, Kerala to its credit. Being a major player in the renewable Energy Sector, THDCIL is also implementing 2000MW Ultra Mega Solar Parks in the State of Uttar Pradesh with UPNEDA