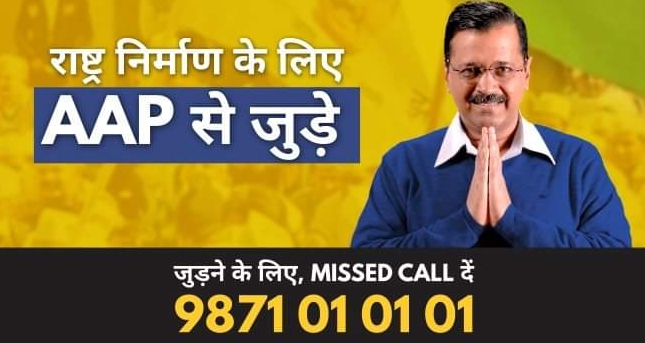 11 lakh people connected with AAP in 24 hours under Rashtra N Around 11 lakh people from all over the country have joined the Aam Aadmi Party’s Rashtra Nirman campaign (nation-building campaign) in just 24 hours.  The party has issued 9871010101 missed call number by which people can join the campaign. Nearly 11 lakh people have participated in the campaign by giving a missed call.  This number was distributed  to people across the country through various media.  The party leaders asserted that  that it is historical that ‘politics of work’ is getting such a large support for nation building from people across the country.Significantly, the Aam Aadmi Party has won the Delhi Assembly elections with an overwhelming majority.  The Bharatiya Janata Party was the key opposition of Aam Aadmi Party.  AAP has won a historic 62 seats in the results of the election on Tuesday.  Whereas the BJP has got just 8 seats.During the election, BJP leaders constantly tried to polarize votes by making false statements against the AAP and it’s leaders. At the same time, the Aam Aadmi Party sought votes from the people of Delhi in the name of work. The BJP kept the entire election campaign around Hindu Muslims and stayed away from issues related to the common man.  At the same time, the Aam Aadmi Party kept the entire election campaign around the basic issues related to the common man and the politics of work.  Despite all the efforts of BJP,the Aam Aadmi Party did not deviate from the politics of work.  The voters of Delhi has kept their faith with the AAP and it’s politics of development.