NTPC plans to anchor 10,000 MW of solar parks in ISA member countries in next two years. 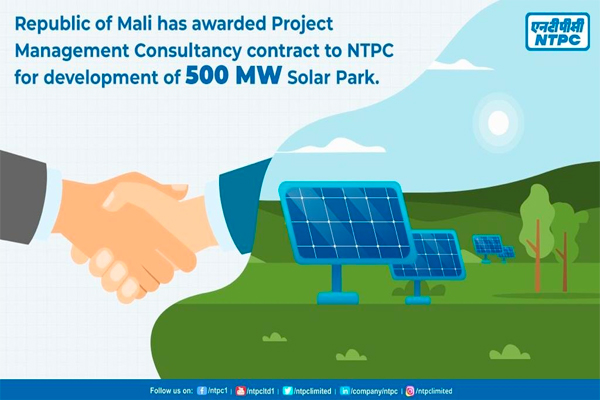 New Delhi: In an event held on 24th June, 2020, chaired by the Hon’ble Minister of State for Power, NRE, Skill Development and President of International Solar Alliance (ISA), Mr. R. K Singh and Honorable Ambassador of Mali H.E. Sekou Kasse handed over the Project Management Consultancy award letter to Mr. Gurdeep Singh, CMD NTPC, for development of 500 MW Solar park in the Republic of Mali.
ISA is an international, inter-Governmental organization, based in India, created with the vision and leadership of Hon’ble Prime Minister, Sh. Narendra Modi and announced jointly with President of France during COP21 held in Paris in 2015. ISA’s vision is for a large-scale solar revolution, hinges on creating a facilitative international ecosystem that enables access to science and economic resources, reduces the cost of technology and capital, facilitates price reduction, and enables development of storage technology and innovation.  With its scale and authoritative understanding of the energy transition opportunities of diverse economies, ISA is the world’s foremost energy transition catalyst for bringing a change from energy poverty to energy empowerment.
The event was hosted by ISA in the Ministry of Renewable Energy, New Delhi, and graced by the dignitaries, Director General ISA- H.E Upendra Tripathy, Secretary (Power)- Sh. Sanjeev Nandan Sahai and Secretary(MNRE)- Sh. Indu Shekhar Chaturvedi and Secretary (Economic Relations) Sh. Rahul Chhabra are among others.
The Republic of Mali has been taking various initiatives towards energy security of the country, especially to increase access to electricity for its citizens, with a focus on solar power and applications. Development of Solar Projects in Mali will make a considerable impact in socio-economic growth of Mali.
NTPC, a Government of India Enterprise and a leading global power company with 62,110 MW installed capacity has vast experience in setting up of Solar Projects and handling various solar programs like the National Solar Mission in India. In 2019, ISA endorsed NTPC as a Project Management Consultant through a competitive process for the member countries to avail the services of NTPC. Earlier the Republic of Togo engaged NTPC for similar PMC support for development of 285 MW Solar Park in Togo. NTPC plans to anchor 10,000 MW of solar parks in ISA member countries in next two years.
Solar parks are being showcased as a best practice from India which had started solar parks as a novel concept and has commissioned a number of projects, thus bringing down cost of solar energy substantially, bringing in investment, creating employment and benefiting the environment in the process.