India poised to be the hub of Arbitration- MoS, HI&PE at SCOPE National Seminar on Arbitration 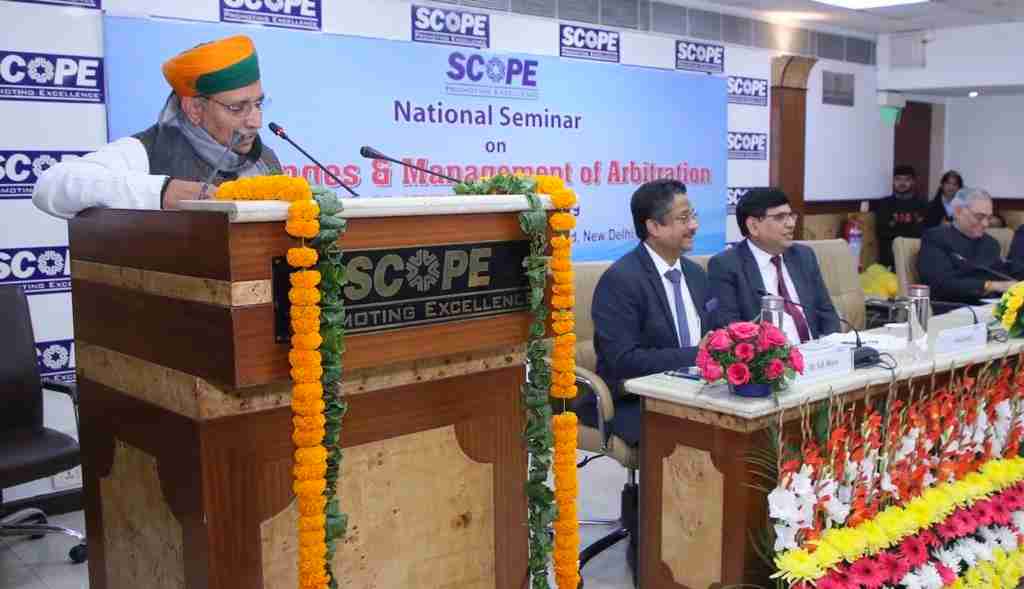 NEW DELHI . Standing Conference of Public Enterprises (SCOPE) organized a national seminar on Challenges & Management of Arbitration which was inaugurated by Minister of State for Heavy Industries & Public Enterprises & MoS, Parliamentary Affairs, Shri Arjun Ram Meghwal. Former Secretary, Law, Shri P K Malhotra; Director General, SCOPE, Shri Atul Sobti; Mr. Sunil Kumar, CMD, MTNL and Dr. S B Mitra, ED (Law & HR), GAIL also addressed the inaugural session. On this occasion, the hon’ble minister also released Special Issue of SCOPE’s KALEIDOSCOPE magazine on Arbitration.
In his inaugural address, Shri Meghwal said that Arbitration & Conciliation (Amendment) Act, 2015 and 2019 by the Government of India are clear indications of the Government’s vision to make India a hub for arbitration. He congratulated SCOPE for conducting the seminar and urged Public Sector Enterprises (PSEs) to create more effective arbitral mechanism which would also help India in further improving its ease of doing business ranking.
Former Secretary, Law in his keynote address advised to expedite arbitration procedure and expressed his pleasure about inclusion of arbitration in contracts of PSEs. He also said that institutional arbitration should be given more importance than ad-hoc arbitration and for that to happen we need to increase the confidence of corporate.
DG, SCOPE expressed concerns on number of pending cases and said that arbitration can not only save time but also money of PSEs. SCOPE Forum for Conciliation and Arbitration (SFCA), he added, is an apt, cost & time efficient platform for PSEs to pursue their arbitration and conciliation matters.  He also said that enforcing contract is key concern for PSEs.
CMD, MTNL proposed the Vote of Thanks and highlighted the growing challenges in the field of arbitration. Dr. Mitra presented the program perspective.
.