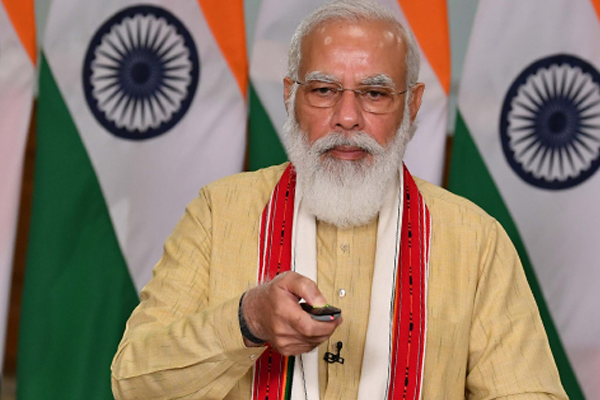 The Prime Minister Shri Narendra Modi dedicated to the nation three key projects related to the Petroleum sector in Bihar today via video conferencing. The projects include the Durgapur-Banka section of the Paradip-Haldia-Durgapur Pipeline Augmentation Project and two LPG Bottling Plants. They have been commissioned by IndianOil and HPCL, PSUs under the aegis of the Ministry of Petroleum and Natural Gas. The special package announced for Bihar a few years ago, focused much on the state’s infrastructure. He said the special package given for Bihar had 10 big projects related to petroleum and gas worth Rs 21 thousand crore. Among these today it is the seventh project which is being dedicated to the people of Bihar. He also listed the other six projects which had been completed in Bihar earlier. He expressed happiness that he is inaugurating the Durgapur-Banka section (about 200 km) of an important gas pipeline project for which he laid the foundation stone about one and a half years ago. He lauded the hard work of the engineers and laborers and active support of the state government for completing this project on time, in spite of the challenging terrain. He lauded the Chief Minister of Bihar for playing a big role in making Bihar come out of the work culture in which one generation used to start the work and the other generation completed it. He said this new work culture needs to be strengthened and it can take Bihar and East India on the development path. 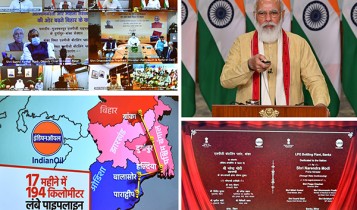 The Prime Minister quoted from the scriptures “सामर्थ्य मूलं स्वातंत्र्यम्, श्रम मूलं वैभवम् ।” meaning strength is the source of freedom and power of labour is the basis of development of any nation. He said there is neither a shortage of power of labour in eastern India, including Bihar, nor this place lacked natural resources and despite this, Bihar and East India remained behind in terms of development for decades and suffered endless delays due to political, economic reasons and other priorities. He said since road connectivity, rail connectivity, air connectivity, internet connectivity were not a priority earlier, gas based industry and petro-connectivity could not be imagined in Bihar. He said the development of gas based industries was a major challenge in Bihar due to it being a landlocked state and thus lacking resources related to petroleum and gas which are otherwise available in the states adjacent to the sea.

The Prime Minister said due to these gas pipelines, big bottling plants are being installed in Bihar. Of which two new Bottling Plants have been launched today in Banka and Champaran. Both these plants have a capacity to fill more than 125 million cylinders every year. These plants will meet the LPG requirements of Godda, Deoghar, Dumka, Sahibganj, Pakur districts and some areas of Uttar Pradesh in Jharkhand. He said Bihar is creating thousands of new jobs from the laying of this gas pipeline to the new industries based on the energy from the pipeline.

The Prime Minister said the fertilizer factory of Barauni, which was closed in the past, will also start working soon after the construction of this gas pipeline. He said today eight crore poor families of the country have gas connections because of the Ujjwala scheme. This has changed the lives of the poor during the period of corona as it was necessary for them to stay at home and they need not go out to collect wood or other fuel.

The Prime Minister praised the youth of Bihar and said Bihar is the powerhouse of the country’s talent. He said the strength of Bihar and the imprint of Bihar’s labor will be seen in the development of every state. He said in the last 15 years, Bihar has also shown with a right government, right decisions and a clear policy, development happens and reaches every one. There was a thinking, education was not necessary as the youth of Bihar have to work in the fields. Due to this thinking, not much work was done to open large educational institutions in Bihar. The result was that the youth of Bihar were forced to go out to study, to work. Working in the field, farming is very hard work and pride, but do not give other opportunities to the youth, nor make such arrangements, it was not right.

The Prime Minister said migrant labourers have returned back and new employment opportunities have also been created. Even during such a huge global epidemic the country has not stopped especially Bihar has not stopped. He added the National Infrastructure Pipeline Project worth more than Rs 100 lakh crore is also going to help in increasing economic activity. He urged everyone to to keep working fast to make Bihar, Eastern India an important center of development.