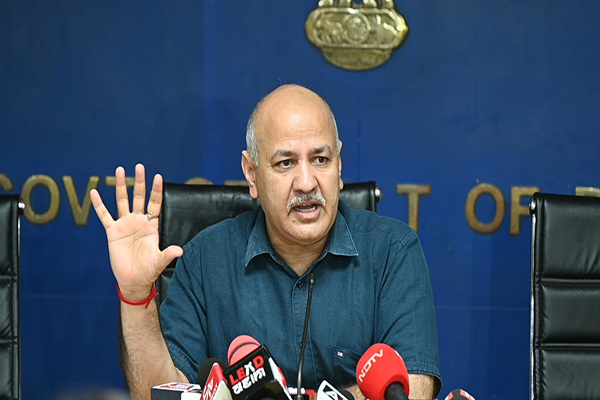 Delhi: Deputy Chief Minister Manish Sisodia said, “Private schools are not allowed to increase their fees.” Announcing the withdrawal of the earlier permission granted to the Sanskriti School, Mr. Sisodia said, “The Kejriwal government will not bow down to any pressure.” He said, “We are taking this decision based on some serious complaints received from the parents of the Sanskriti School, Chanakyapuri.
Mr. Sisodia said, “Honorable Chief Minister and I have already received multiple complaints from parents regarding Sanskriti School doubling its fee. The school increased its fees by almost 75 per cent which is unacceptable. Therefore, after consultation with CM Arvind Kejriwal, we are revoking the order issued for Sanskriti School regarding increasing the fee.”
According to Dy CM, there were lapses found in the functioning of the Sanskriti School. He said, “Under the system called GAAP, it is necessary to follow a special system of accounting and audit but the Sanskriti School did not follow it. Also, there was no need to increase the fees as the school already had a surplus amount which they gained during 2017-18, due to which their proposal to increase the fee was rejected by the Delhi Government.” He further added, “During the same year, we directed this school to pay the teachers under the Seventh Pay Commission from the surplus amount and not to put this burden on the students. But the school did not comply with this order”
Related Posts

Dy CM Manish Sisodia said, “A school gets permission for establishment only if it has a three-month salary fix deposit for the staff. Therefore, now the demand to increase the fees is unreasonable because that amount has already been deposited as a fixed deposit since the inception of the school.” “The Anil Dev Singh Committee constituted by the Delhi Government had recommended that fees arbitrarily increased by private schools from 2010 to 2012 should be refunded. Now, the school wants to recover this amount from the students by showing it under the school expenses. Whereas, the previously overcharged amount cannot be allowed to be shown as an expense.”
“The school has not followed the Supreme Court order regarding depositing the development fund in a separate account. For all of these reasons, Sanskriti School cannot be allowed to increase the fees. Also, due to the COVID-19 pandemic, no school is allowed to collect any amount other than the tuition fee.”
“Parents have shared with me that they are under immense pressure to speak in favor of the school. The Kejriwal government will not bow down to any pressure. During my interaction with the Hon’ble CM today, he clearly stated that the government of the Aam Aadmi Party will stand with the students and their parents.”
Share on Facebook Share on Twitter Share On WhatsApp
Leave A Reply
Cancel Reply
Advertiser Logo