State Government has reduced the power tariff for MSMEs-Manohar Lal 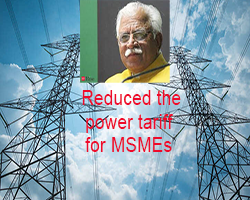 Chandigarh:  Haryana Chief Minister, Mr Manohar Lal today offered all support and cooperation to the young entrepreneurs for setting up their units under the Micro Small and Medium Enterprises (MSMEs) in Haryana and said that the State Government has identified 56 clusters of various categories to be set up in all 22 districts of the State which would benefit about 70,000 MSMEs in the State. He said that the Government would also ensure that the functioning of existing MSMEs in the State is not affected due to COVID-19.

Mr Manohar Lal was interacting with the beneficiaries of Prime Minister’s Employment Generation Programme (PMEGP) during a Webinar organized by the newly created Department of Micro, Small and Medium Enterprises, Haryana here today. He said that the State Government has reduced the power tariff for MSMEs of up to 20 KW to  Rs 4.75  per unit in C and D blocks in the State. While referring to COVID-19, he said as now industrial operation has resumed in the State, as many as 38.13 lakh workers have returned to work in 56,000 industrial units of the State. Similarly, the revenue generation of the State has also increased in the last few months. The State Government received GST in June, 2020 which is equal to the amount received in the corresponding period of last year. Apart from this, the electricity consumption has also increased to 80 per cent in June 2020 and it is expected to be increased to 100 per cent in the month of July 2020, which reflects the industrial sector has come to normalcy.