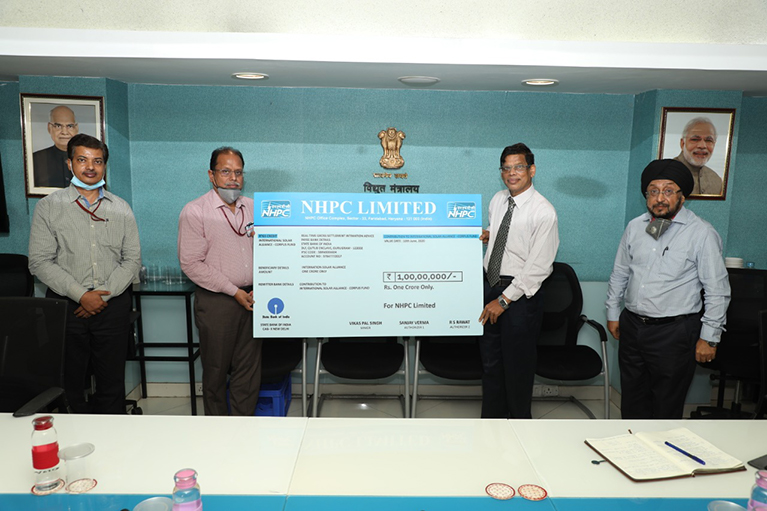 (Faridabad): NHPC, India’s hydropower major, which has diversified its portfolio to include Solar Power business has contributed a number of Rupees One Crore to International Solar Alliance-Corpus Fund as part of first instalment. NHPC is eyeing on becoming Corporate Member of the ISA to avail the benefits of its membership. NHPC’s membership will open up collaborative opportunities with World Bank, ADB, AIIB, EIB, EBRD, AfDB, NDB and GCF (ISA’s financial partners) as syndicate/ consortium to fund infrastructure projects. NHPC will also have access to low-cost fund from solar bonds to be raised by ISA knowledge partners such as London Stock Exchange among others, who are ISA’s sub-sovereign partners. The membership will give NHPC new financing opportunities in emerging markets of ISA Member Countries and ISA will facilitate its entry into the markets in Member Countries.  Becoming a Corporate Member of the ISA, would pave way for NHPC to mark its presence in other countries in near future. NHPC will also be joining the “Annual Conclave of ISA Corporate Partners” and get an opportunity to shape the ISA policies, programs, activities and functions that could further or supplement or align with its own policies.The bank advice of contribution was presented to Shri Upendra Tripathy, IAS, Director General, International Solar Alliance by Shri R.K. Jaiswal, Executive Director (Renewable Energy), NHPC on 10th June 2020 at New Delhi.  Shri Himangshu Saha, General Manager (Renewable Energy), NHPC and Shri K.S. Popli, Senior Consultant, ISA were also present on the occasion.

Narendra Modi is committed to usher in clean energy…

NHPC has already ventured in Renewable Energy Sector with a commissioned capacity of 100 MW and is all set to develop new renewable energy projects to the tune of 7500 MW in coming two to three years. NHPC recently conducted successful e-auction for 2000 MW of Solar Projects. Out of this, NHPC has issued Letter of Awards (LOA) to Solar Power Developers for interstate transmission system (ISTS) grid-connected photovoltaic projects aggregating to 1600 MW installed capacity. NHPC is also in advance talks with the State Govts and UTs like Telangana, Odisha, Rajasthan and Leh to take our solar journey to a bigger canvas for more than 4000 MW of Solar power. NHPC is accordingly exploring the viability of developing various RE Projects in different commercially viable models such as Hydropower Projects blended with Solar Power, Pumped Storage Projects in Remote Areas with Solar Power in Pumping Mode and Floating Solar Project.  NHPC has planned to add 10000 MW Solar Power under the various schemes of MNRE in addition to hydro capacity addition of 5000 MW by 2025.