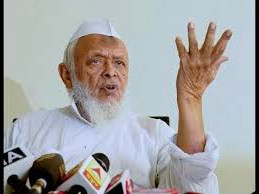 New Delhi, Politics of hate have divided the country once, and today the country is at the same juncture, once again, said Maulana Arshad Madani, eminent Islamic scholar and National President of the Jamiat Ulema e Hind. Addressing the “Save Democracy” conference at Media Plus Auditorium in Hyderabad on Tuesday afternoon, Maulana Madani said ” Muslims have been living in peace and harmony for over 1300 years, the incumbent government at the centre is trying to divide the communities today on the basis of religion.

The program was organized by the Jamiat Ulama Telangana and Andhra Pradesh. Maulana Madani said ” “If the communities are divided based on their minority character, what will become of the minorities of the country? The country will only be saved, if we exist in communal harmony”, he stressed.He said “Muslims and Hindus must jointly reject CAA, NRC and NPR. In states, where the government is opposing the centre’s laws, people can proactively reject it”. “In states, where the government is supporting the centre’s laws, Muslims should partake if Hindus and other community members too are uniting against these laws, for their safety”, he advised.The incumbent government is working to present the citizenship issue as a Hindu Muslim problem. The unrest in Uttar Pradesh, the violence in Delhi are prime examples. Speaking about the citizenship law, NPR and NRC, Maulana Madani said “Jamiat Ulema e Hind believes that CAA is an attack on the secular nature of India, and not a Hindu Muslim issue. The secular character of the constitution binds Hindus, Muslims, Sikhs, Jews, Buddists, and people of other religions.”Recollecting the Jamait’s role in framing the ‘secular’ constitution, he said “the Jamiat has played an important role in India’s freedom, it opposed the partition of India even when the respect of its veterans was at stake. Jamiat was the sole body that demanded from Mahatma Gandhi and Jawaharlal Nehru that if India was partitioned, India’s constitution would be a secular constitution.It is pertinent to mention that Maulana Arshad Madani is the son of renowned freedom fighter and founder member of the World Islamic League Makkah Maulana Husain Ahmed Madani.

He said “the Jamiat laid down conditions that guaranteed religious freedom and demanded from the then Congress a secular framework, a secular constitution if the country attained independence, expressing the freedom of Azaan, Namaz, Juma prayers, Eid, Zakat, fasting, religious propagation, religious freedom, ability to set up religious institutions, culture, educational instituions, eidgahs, waqf properties, etc for Muslims.”Maulana Arshad Madani recollected the Gujarat 2002 riots saying “when Narendra Modi was the Chief Minister, more than 2000 Muslims were murdered, raped and several went missing. However, he said the people of India are still secular. “People of different religions are protecting each other after the recent riots ”

He said if the government failed to take lessons from the recent developments where it divisive politics cost it name and reputation, it will continue to fail. He also welcomed the religious leaders who are conveying the message of peace and communal harmony.Speaking about the controversy around NRC, NPR and CAA, he said “a massive public meeting will be organized to create awareness among the people if the Telangana government doesn’t boycott these laws. People of different religions will be invited to this conference, he said.

Speaking on the occasion, Prof Kodandaram said “the citizenship laws are a great danger to thousands of common people who may not have these documents to submit.” For example, in many Hindu marriages, the pundits suggest to change the name of the bride, while matchmaking. This opens door for doubtful citizenship of these Hindus, who are countless in number. The constitution guarantees many rights, but the citizenship laws will take away this.The new developments put the burden of proof on the citizens for the first time. This is the biggest threat to all Indians. We must unite to work against these laws. CAA is a small issue in comparison to the different attacks on the constitution, uneducated and tribal people will also be greatly affected.He said a lifetime is wasted sometimes in fighting for a small piece of land while trying to prove ownership, how then can someone survive the burden of gathering proof of citizenship, getting authenticity of their documents endorsed. He urged the Chief Minister of Telangana KCR to issue an official statement on NPR, and pass an official resolution on the lines of Bihar government. He urged the people to unite on these laws.

Retired High Court Judge Justice Chandra Kumar, speaking on the occasion, said “the country is facing the terrible situation after the independence of India. The freedom fighters envisioned an India free from religious, cultural divides, full of unity and tolerance, but their vision is short-lived.He also questioned why the Delhi Police didn’t follow the law and file FIR against communal elements like Kapil Mishra who incite violence. “Where is the rule of law?”, he fervently questioned.

He said it is the fundamental duty of the high court and the supreme court to protect the fundamental right of the citizens including the right to life, and right to equality. If the Supreme Court cannot protect the fundamental rights of citizens guaranteed under the constitution, what is the purpose of supreme court, despite all the power it possesses.We are in a precarious and dangerous condition, and must step out of it. The real heroes are being portrayed as traitors and vice versa, referring to the midnight transfer of the Supreme Court judge who gave orders to shift victims of riots to super-specialty hospitals. He said “transfer applications of about 150 judges are pending with the Supreme Court.

The economy of India is in peril. The government cannot even hide its face. The government is allowing private entities to engulf them, for vested interests.The government wants to divide the country into Hindus and Muslims with is fascist ideology behind NPR. NRC and CAA. These laws will divide India. The Delhi riots have revealed the secular and religiously tolerant character of people affected by violence, a clear indicator that violence was penetrated by perpetrators.Congress leader Mohammed Ali Shabbir, State President of Jamiat Ulema e Hind Mufti Gayasuddin Rahmani, ex-MP Aziz Pasha, Jamaat e Islami Hind President Hamid Mohammed Khan, activist Jaswin Kaur, Prof. Vishveshwar Rao, and others were also present on this occasion.