Vehicles will be exempted from the Odd-Even rule- Kejriwal 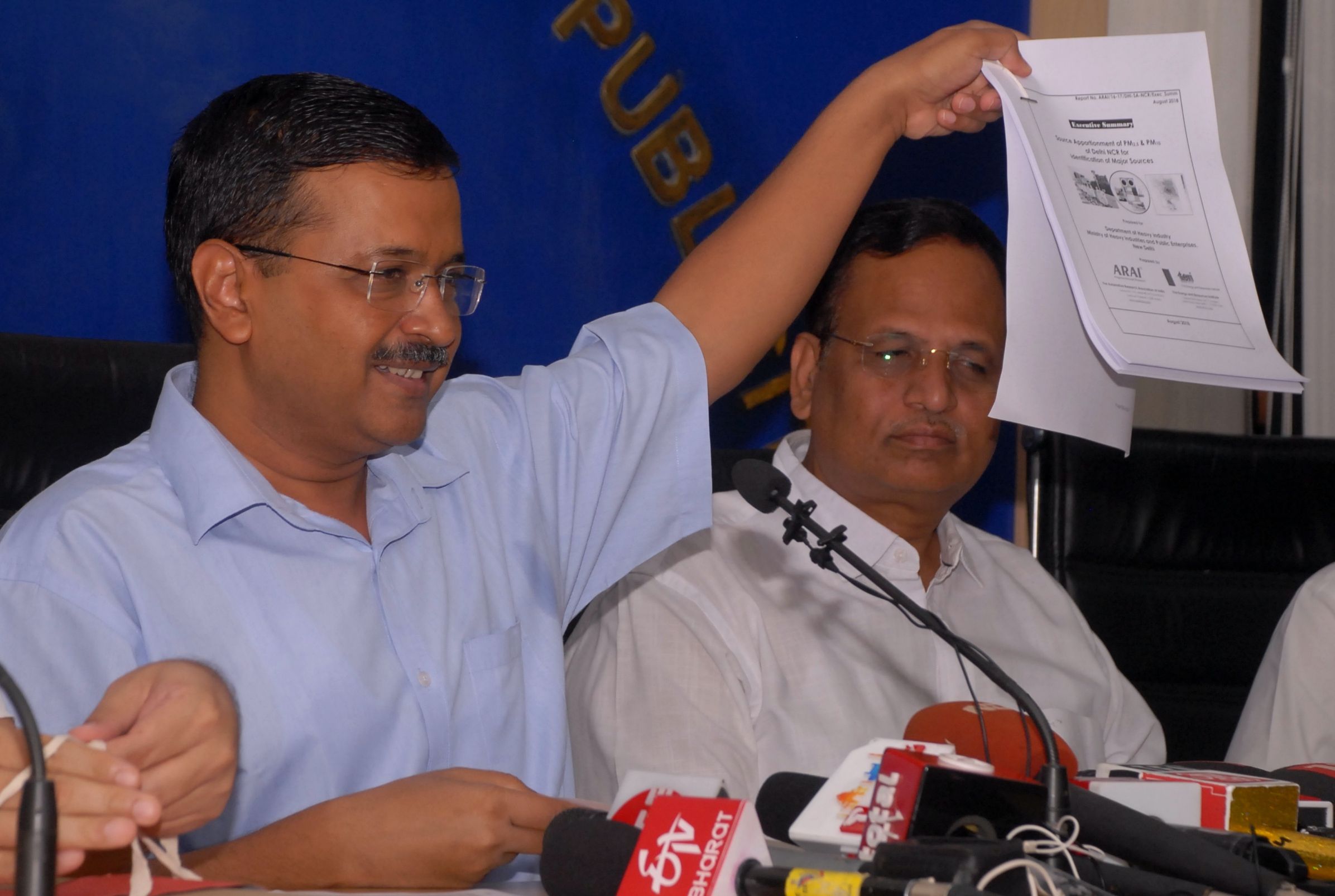 Delhi Chief Minister Shri Arvind Kejriwal addressed a press conference on the various aspects of the implementation of Odd Even in the Delhi secretariat on Thursday. The Chief Minister listed down various exemptions under the odd-even scheme, which is to be implemented from 4th to 15th November.

The Chief Minister said, “The Delhi government had decided to implement the Odd-Even scheme in November due to the pollution caused in the state from stubble burning in the neighboring states. The scheme will be implemented from 4th – 15th November, from morning 8 am to evening 8 pm. Odd-numbered vehicles will be allowed on odd dates and even-numbered vehicles will be allowed on even dates, on all days except Sundays. The scheme will also be implemented on vehicles coming from other states. A fine of Rs 4000 will be levied upon those caught violating the scheme.”

The following vehicles will be exempted from the Odd-Even rule:

Vehicle of President of India

Vehicle of Vice President of India,

Vehicle of Prime Minister of India,

Vehicle of Governors of States/UTs,

Vehicle of Chief Justice of India,

Vehicle of Speaker of Lok Sabha

Vehicles of Leaders of Opposition in Rajya Sabha and Lok Sabha,

Vehicles of Judges of Supreme Court of India,

Vehicle of Lieutenant Governor of National Capital Territory of Delhi,

Vehicles of Chief Justice and Judges of Delhi High Court,

Vehicle of the Lokayukta

Enforcement vehicles will also be exempted such as vehicles of police, Delhi transport department vehicles, and vehicles so authorized by GNCTD and paramilitary forces.

Women only vehicles – including children of age up to 12 years

Stubble burning in the neighboring states cause of pollution in Delhi: CM Kejriwal

The pollution in Delhi was at a moderate level since the last 7-8 months. The Chief Minister said, “Delhi has become a gas chamber due to pollution from stubble burning coming from the neighbouring states. A comprehensive winter action plan has been prepared by the Delhi government. Under this, the Odd-Even Scheme has been announced. Under the Odd Even scheme, the government has fixed the day of using the even and odd numbers of vehicles. Vehicles with even number should be used on even date and odd number vehicles will run on odd date. The move is aimed at limiting the emission by vehicles in the air over that period. Delhi has been facing the smoke coming due to stubble for years,”We respect all experts, but the people of Delhi alone cannot be blamed for the pollution; it is through their efforts that the pollution has reduced by 25%: CM Shri Kejriwal On various agencies estimating the contribution of stubble burning in the Delhi pollution, CM Shri Arvind Kejriwal said, “I respect all experts and their views on pollution. I am also an engineer and am from the scientific community. Opinions expressed by all experts with respect to pollution are correct, but are coming with different perspectives. Today I read an expert opinion, which was actually based on a June 2015 report by IIT Kanpur. But we can’t take a policy decision on the basis of data/findings from four years ago. I am presenting today a Report by TERI in collaboration with Automotive Research Association of India published in 2018 based on the data in 2016-17. The reports says that in winter only 36% of pollution occurs in Delhi due to internal sources, and rest 64% from the sources outside the city; and in summer 26% pollution caused by internal sources and rest by external sources.” “There is also the report by SAFAR which claims its estimates on pollution are based on satellite images after assessing the quantum of stubble burning, carbon produced and the speed and direction of the wind, etc. No agency clearly says what is the exact quantum of pollution in Delhi at present and what are the sources. This can only be done by what is known as Real Time source apportionment of pollution. No one has that real-time data. If we decide the causes of pollution in October 2019, based on the data in 2017 or 2018, it won’t be correct,” he added. “Now the truth is that Pollution in Delhi is caused by both internal and external sources. It is not right to blame the people of Delhi only for pollution. Same attention should be given to the external sources of pollution too. In fact the people of Delhi should be appreciated for reducing pollution, and for accepting some harsh measures. No other city has reduced 25% of pollution. Delhi has done it. People of Delhi in fact deserve appreciation. We are not satisfied by this, we need to fo much more, but unless there are efforts to tackle the smoke due to crop burning in neighbouring states, Delhi’s problems will continue,” said the Chief Minister. “It is almost impossible to assess the break-up of the impact of both internal and external sources of pollution in Delhi with the existing technology. In the previous week, one agency reported that stubble burning causes 1% of pollution in Delhi, another agency says it is 10%, that means 10 fold difference. How can this be scientific?” asked the Chief Minister.Real-time source apportionment of pollution in Delhi possible from next April “Delhi Government in its budget announced the collaboration between the government and Washington University in this respect.  We have set up a centre next to DPCC office near India Gate. The centre is taking the sample of air in Delhi on a daily basis. After analyzing the air samples for a year, the base data of air quality in Delhi will be prepared.  From next April onwards, we’ll be able to provide the details of air pollution and sources in an interval of every four hours. That’s real-time monitoring. The machine has already been installed. But, for specific outcome, one year of a base-level study is required,” said the CM. Staggering office timings being considered On the considerations regarding staggering office timings, CM Shri Kejriwal said, “We have asked Mr. O.P. Aggarwal to study on the scope of staggering office timings in Delhi and their report is expected soon. The details will be available in the next week.”